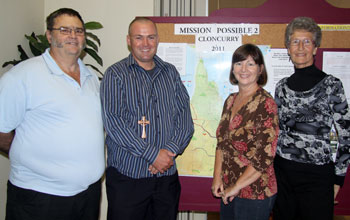 In 2009 the congregation combined with local community groups to send a convoy to central western Queensland to refurbish station runways.

Approximately 30 volunteers, have signed up again this year, working for two weeks from 24 June to bring runways back up to Royal Flying Doctor standards.

It is vital work according to the McKay Patrol flying minister, Rev Garry Hardingham, who will connect the workers with
properties in his enormous ‘parish’.

“The last time we ventured west our strips saved two lives – a young lad who had been bitten by a snake and an older bloke who had a heart attack,” he said.

This year four ministers are going on the trip to support Mr Hardingham. Darren King, Peter Overton, Bruce Dingle and Tim Griggs will get a taste of bush ministry and, perhaps, a taste for it.