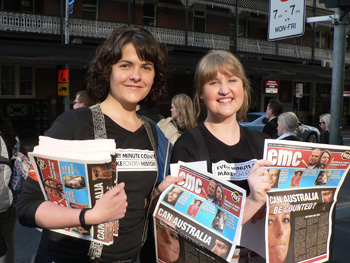 THE MAKE Poverty History (MPH) campaign launched a free newspaper in August, distributed to 50,000 commuters, coinciding with the commencement of the United Nations Department of Public Information conference on global health issues in Melbourne.

Every Minute Counts (EMC) is a tabloid style free newspaper aimed at making the issues surrounding poverty and development accessible to everyone.

MPH co-chair Andrew Hewett said poverty was an issue all people should be concerned about and involved in.

“We think it’s time we took the message about poverty alleviation to the man and woman on the street,” he said.

4000 copies of EMC were distributed in Brisbane where 25 volunteers teamed up to hand out the papers to commuters in the CBD, Fortitude Valley, Chermside, West End and St Lucia.

Make Poverty History is a coalition of more than 60 aid agencies, community groups and religious organisations working to hold governments accountable to their commitment to halve global poverty by achieving the Millennium Development Goals.