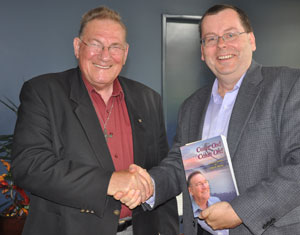 Rev John Mavor’s newly-released autobiography is not just a compelling account of one minister’s amazing life, it is also a valuable social history of church and community life in Australia and the Pacific over seven decades said ABC religious programs executive producer David Busch.

Mr Busch made the comment in launching Mr Mavor’s book, Come On! Come On! A Journey in Ministry, at Chermside-Kedron Uniting Church on 15 October.

Mr Busch said the book’s comprehensive detail provided a rich context of social and church history ranging from Mr Mavor’s childhood and Methodist upbringing in Beaudesert in southern Queensland to his ordination, circuit ministry, extensive work in education, youth and parish mission in the Queensland and NSW Synods, his years in the Pacific, heading up National Mission and Evangelism with the Assembly, and his term as President-elect and President of the Assembly.

“The clarity, affection and detail of his stories demonstrate that John is intensely interested in people and places and their history,” said Mr Busch. “These matter because John is first and foremost a disciple of Jesus with a passion for education and mission, both of which must be grounded in local realities and love for the people there.”

Of particular note was the chapter on his Presidency, a period when controversy over sexuality erupted across the church.

“John prayerfully came to his own position on these issues, but as President he carried deep in his own spirit and heart the hurts and tensions of the whole church,” said Mr Busch. “The grace, integrity and courage of his leadership was one of God’s gifts to the church for such a time.”

Come On! Come On! A Journey in Ministry is $45 plus $10 postage. Copies are available from the author via email here.