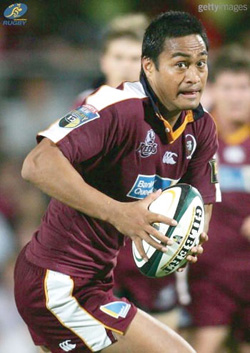 Queensland Reds centre Steve Kefu is preaching the Rugby Union gospel outside of Ballymore, coaching a group of youths from the Park Road Tongan Uniting Church in the game they play in heaven.

Kefu jumped at the chance to give back to the various island communities in Brisbane.

“When I was asked by the kids from the youth at church at West End (to coach the team), I could not turn the chance down. I’m enjoying it immensely; I love coming along and meeting a lot of new faces,” said Mr Kefu.

“It makes me nervous, the same nervousness when you run out for Queensland, coaching here and seeing these kids come through.”

Proving to be a popular and influential presence at the youth group, Mr Kefu’s presence made for a strong turnout.

“First session I came to I had 40 kids and word got around and I ended up with 50. The only hard thing is trying to put 22 into the squad but all the other boys still turn up to support them.”

Combining a unique blend of Samoans, Tongans, Fijians, New Zealanders and non-Polynesians, the Uniting team has players from all walks of life.

With quite a few of the youth in the team coming from troubled backgrounds, Mr Kefu appreciates the importance of the team.

“I know a few of the kids in my side especially have had histories that have been a bit sketchy sometimes and seeing them come to training and putting them through a few drills and being part of a team, they realise how important they are in this family environment, in this team.”

The team recently entered the Pacific Fiefia Rugby Tournament which promotes community relationships and cultural custom-ary leadership in an alcohol-free and drug-free environment.
United team captain Rob Pitau said Mr Kefu is “cool, calm, funny and someone these guys can look up to”.

“Tournaments like these are important for us kids to be involved in activities like these. A lot of Polynesian kids are in jail or detention centres. It is important for them to spend their time out here playing footy, not doing bad stuff,” Mr Pitau said.

Mr Kefu agrees. “It’s important for the cultures to come out here and meet each other. It’s great to have the families come out and support their children,” he said.

The Uniting team finished first, taking home the Sione Mafi Cup and, at the end of the season, they acknowledged that winning wasn’t the only thing.