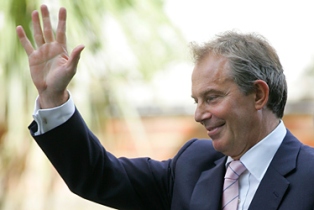 Tony Blair has told an audience of 1600 people at Westminster Cathedral that his faith foundation, to be formally launched in May, will aim to bring together people of all major religions in pursuit of the United Nations’ millennium development goals for improving conditions in the developing world by 2015.

Speaking on 4 April in his first detailed public speech on religion since his conversion to Roman Catholicism after stepping down as Britain’s prime minister in 2007, Blair made no mention of the Iraq war and argued that religions of all kinds should be rescued from extremism to help meet a "profound yearning within the human spirit" at a time of unprecedented global turbulence.

"For religion to be a force for good, it must be rescued not simply from extremism, faith as a means of exclusion; but also from irrelevance, an interesting part of our history but not of our future," said Blair. "Faith is reduced to a system of strange convictions and actions that, to some, can appear far removed from the necessities and anxieties of ordinary life. It is this face that gives militant secularism an easy target."

Blair’s foundation will focus on the Abrahamic faiths – Christianity, Judaism and Islam – as well as Hinduism, Sikhism and Buddhism, and help followers "who stand up for peaceful co-existence and reject the extremist and divisive notion that faiths are in fundamental struggle against each other".

Blair, who was an Anglican while prime minister, said he had underestimated the extent to which the global centre of gravity, economically and politically, was shifting from West to East.

"China and India together will industrialise the bulk of their populations, presently employed in subsistence agriculture, probably within two decades," said Blair. "The strong historical and cultural influences of religion in both East and West could help both hemispheres unite around common values rather than undergo a battle for domination."

Before Blair’s 45-minute speech began the Catholic peace group Pax Christi held a silent vigil, and as the audience left demonstrators bearing placards, banging drums and blowing whistles called for the former prime minister to be prosecuted as a war criminal.

Former Iraq hostage Norman Kember, who took part in the Pax Christi vigil, told reporters that what had happened to him was a minor blip compared to the suffering of the Iraqi people. He felt it was partly Blair’s fault, and that he should confess that he had made an error and repent.

Blair took questions submitted in advance but none of those he answered referred to the Iraq war. His lecture was one of six in the Faith and Life in Britain series organised by Cardinal Cormac Murphy O’Connor, the most senior Catholic in England and Wales.

He explained why he had not been explicit about his religious beliefs while he was prime minister noting, "there is a reason why my former press secretary Alastair Campbell once famously said: ‘We don’t do God’. In our culture, here in Britain and in many other parts of Europe, to admit to having faith leads to a whole series of suppositions, none of which are very helpful to the practising politician," said Blair. "First, you may be considered weird. Normal people aren’t supposed to ‘do God’."