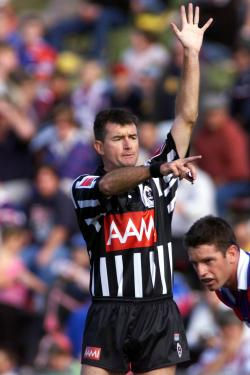 Australia’s number one whistle blower Tim Mander is set to make the transition from a career with the NRL to blowing the whistle on youth issues.

Just months after being named the world’s number one referee and with a bible college degree under his belt Tim Mander will take on the role of CEO for one of Australia’s leading Christian youth and children’s organisations, Scripture Union Queensland, on January 9, 2006.

Tim said yesterday the career change was not a decision made overnight. After a highly satisfying NRL career and years of volunteer involvement with SU Queensland, it was the right time to make the move.

“With the full time siren blowing after 14 years as a NRL referee, I realised this was my chance to consider again the greatest passions in my life – my family, my faith and my lifelong desire to support children and youth,” he said.

“SU Queensland is absolutely intent on providing youth and children with hope, direction and purpose which can only come from a personal relationship with Jesus Christ,” he said.

“Each program SU Queensland run is a vehicle for the local for the churches to use to reach a young generation.

“I served as Deputy State Director for SU Queensland in the 90’s and chairman of the board so I feel as though I’m returning home. I can’t think of a better place to be.”

Tim, 44, completed his studies at the Bible College of Qld with a Bachelor of Ministries in 2003.

Tim refereed the last two Telstra Premiership Grand Finals, and was named International Referee of the Year for the 2005 Golden Boot Awards.

He was also 2005 Queensland Father of the Year.

Outgoing CEO Duncan Brown said Tim was the right person to steer the movement through a period of continued rapid growth.

“In the past five years, SU Queensland’s services have skyrocketed in demand and scope, and Tim’s passion, his top management skills and his positive profile make him the ideal candidate for CEO,” he said.

Photo : Tim Mander on the field