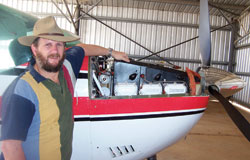 McKay Patrol’s Rev Garry Hardingham is flying high quite literally with a new engine/propeller refit for the Patrol’s Cessna 182 aircraft.

The Patrol named after the late Rev Fred McKay, successor to Royal Flying Doctor Service founder John Flynn, covers an area of over half a million square kilometres across north-west Queensland and into the Northern Territory.

The flying padre travels about 80,000 kilometres a year visiting remote communities and sheep and cattle stations, costing around $25,000 in fuel. The new engine and propeller will reduce this cost by about $3,000 of fuel per year.

The old engine had come to the end of its usable life and for safety reasons and to meet Civil Aviation Safety Authority (CASA) requirements the refit was scheduled for late 2005.

Director of the Synod Department for Financial and Property Services Mr Bruce Binnie described the McKay patrol as an icon of the Queensland Uniting Church that is not only well-known and recognised, but more importantly well-received in the outback areas.

“Replacing the engine has been a major project in terms of the cost and has been well supported from a whole variety of sources, but the challenge remains and more funds will be required because of escalating costs,” said Mr Binnie.

Mr Hardingham said the new engine will also increase the safety of the aircraft. The savings in flying time and fuel costs is an added benefit.

“In a return trip to Borroloola the old combo would have taken six hours and cost $456 in fuel. With the new combo the same trip will take less than half the time and cost $420, a saving of at least $30.”

Grateful to the many generous donors who made the new engine/propeller fit-out possible, Mr Hardingham said that despite the savings, it is crucial for the McKay Patrol to raise more money to keep the plane in the air.

“We desperately need money to refill the engine bucket and keep running costs going,” he said.

“The most important thing is that we get a much better performing aircraft that will take off towards heaven like a home-sick angel!”

Happy take-offs Garry, and we pray that you have just as many safe landings.