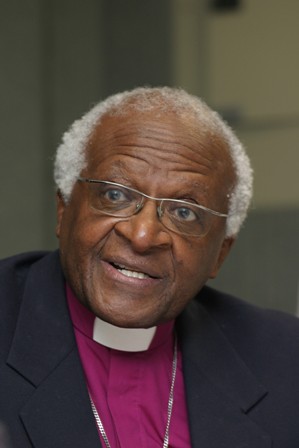 Archbishop Desmond Tutu says he has been saddened by his Anglican church’s position about the ordination of gay priests, in his biography which is to be released in the United States and Europe on 7 October, his 75th birthday.

The Nobel Peace Prize Laureate, who gained the award in 1984, at the height of the struggle against apartheid, is also critical in the book of former South African president F.W. de Klerk for his failure to more fully admit accountability for apartheid atrocities.

World Council of Churches general secretary, the Rev. Samuel Kobia, said in a congratulatory letter to Tutu on 6 October: "You have challenged and pushed us never to adjust to the powers that are, but always to discern the signs of God’s coming kingdom and to act accordingly." Kobia said, " Through your work with the Truth and Reconciliation Commission, you gave this fractured and broken world a model for overcoming the wounds of past evils and for creating space for healing and reconciliation."

On visit to South Africa, Indian Prime Minister Manmohan Singh said his country had chosen Tutu for the Gandhi Peace Prize – India’s highest international award. He made the announcement on 2 October, which commemorates the birthday of Mahatma Gandhi, who first became an activist in 1906 while working as a lawyer in South Africa. The Indian prime minister said Tutu was chosen for the award for his "invaluable contribution towards social and political transformation through dialogue and tolerance".

The authorised Tutu biography, entitled Rabble Rouser for Peace, is written by former South African journalist and trade union leader, John Allen, who also served for many years as Tutu’s press secretary when he was archbishop and later when he chaired the Truth and Reconciliation Commission.

"If Desmond Tutu had become Archbishop of Canterbury – which the new book about him claims the Queen’s counsellors in London were considering in 1990 – the Church of England might have struck a deal over gay and lesbian rights by now, but South Africa would have missed some crucial signposts to the promised land," said South African writer Heidi Holland in a South African Mail & Guardian newspaper review on 6 October.

When he served as archbishop, Tutu was critical of the South African Anglican church policy to allow gay priests to minister in parishes as long as they remained celibate, but he was unable to change the approach. He also approved of blessing of gay and lesbian relationships for lay church members, but declined to call them marriages.

Tutu is critical of Rowan Williams, the Archbishop of Canterbury and titular head of the worldwide Anglican Communion, for bowing to pressure from African bishops strongly opposed to homosexual priests. "He found it little short of outrageous that church leaders should be obsessed with issues of sexuality in the face of the challenges of AIDS and global poverty," Allen writes.

Former South African president F. W. De Klerk, who will also be at Tutu’s party, failed to act on his suspicions that the apartheid security forces were committing human rights abuses, De Klerk is quoted acknowledging in the biography. "Where maybe I failed, was not asking more questions, not going on a crusade about things, following up on a slight uncomfortableness you feel here and there," De Klerk told Allen. "I was at times maybe not strong enough on following up on my instincts."

[Rabble-Rouser For Peace: The authorised biography of Desmond Tutu by John Allen US: Free Press, ISBN 0743269373]