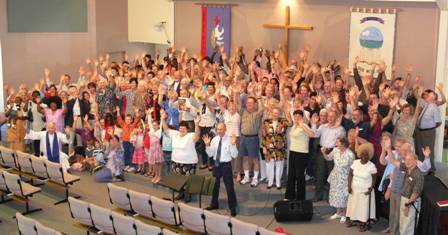 Guinness World Records have officially verified that the first ever world record has been set for the most number of people to Stand Up against poverty in multiple locations over 24 hours.

“9,731,983 stood up in India including 38,000 at the start of the India-England cricket match. Half a million young people in Bangladesh formed white chains in 64 locations.

Ms den Houting said 18 Members of Parliament from all parties joined in the outdoor Stand Up event in the Parliament forecourt, a great achievement on a sitting day.

"Guinness is quoted as saying, ‘It’s the largest single coordinated movement of people in history’, which is also a great description of the movement we are all a part of. "

At each event, people stood up and pledged their solidarity with the world’s poorest people and demanded that governments take urgent action to end poverty and inequality and to meet and exceed the Millennium Development Goals.

The UN Millennium Campaign’s Executive Coordinator Eveline Herfkens said, “Together we have set an incredible record for the largest number of people standing up to demand action on poverty.

“But the record we really want to break is the world’s record of breaking promises and ignoring the poor. We don’t want to record numbers of people dying of poverty every year. This is the great issue of our times, let us become great by dealing with it decisively.”

In Johannesburg, Kumi Naidoo, spokesperson for the world’s largest anti-poverty coalition – the Global Call to Action Against Poverty (GCAP) said: “Ordinary people around the world have stood up to express their passion to end poverty. Together, we have sent a clear message to our political leaders that we are going to keep pushing them to deliver on aid, on debt cancellation, on trade justice and to provide good and accountable governments. The people’s voices are growing louder. We will not rest until poverty is ended”.