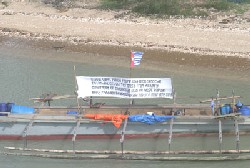 Following criticism last week by the Indonesian Ambassador to Australia Mr Hanzah Thayeb an Indonesian parliamentary commission has also criticised Australia over the granting of Temporary Protection Visas to the 42 Papuan Asylum seekers.

Mr Thayeb was withdrawn to Jakarta on 24th March and claimed the UCA is supporting “separatism” in Papua and is making claims that create a “stigma” for Indonesia.

Executive Secretary of Uniting International Mission for the Uniting Church in Australia Rev John Barr was specifically mentioned in the story was reported in the Australian media on 20th April.

Mr Barr responded by saying that the Uniting Church in Australia has placed a high priority on our partnership with Papua and is committed to building positive, constructive relationships with Indonesia.

"A letter has been prepared and will be sent to the Indonesian Government that outlines our commitment in Papua and our desire to continue a positive engagement with Indonesia," he said.

"Our concern continues to focus on a just and peaceful resolution to the conflict in Papua.

"We will maintain our position on human rights, will continue to support the Evangelical Christian Church in the Land of Papua (GKI) in its role as a peacemaker, and will maintain a commitment to health and education in Papua.

"For the Uniting Church this is not an issue of independence for Papua – it’s an issue of welfare, justice and the upholding of human rights.

Mr Barr asked that church members might pray for the situation.

"Lives are at stake while opportunities do exist for a resolution to this critical situation."

Identified as the most eastern province in Indonesia, Papua’s (sometimes known as “West Papua”) history is a turbulent one.

Recent events have placed the region in the headlines again. These events concern the granting of Temporary Protection Visas (TPV’s) to 42 Papuans who arrived in North Australia by canoe in January.

Then on the 16th March a demonstration in Papua’s main city turned ugly and three security personnel were killed. Police actions have seen at least 73 students arrested while hundreds have fled into the hills and an undisclosed number of civilians have been shot dead.

The Uniting Church in Australia has worked with our partner, the GKI for more than 12 years. The GKI is the major church in Papua and it plays a vital role as a peacemaker and reconciler in a community living in fear.

The UCA identifies a number of issues in Papua. These include a breakdown in trust between many Papuans and the central government in Jakarta; the lack of reform in Papua that includes failure to implement full “Special Autonomy” for Papua; a huge military presence that has increased since the beginning of the year; ongoing abuses that involve threats, abuse of women and clandestine killings; a serious lack of health care facilities and limited opportunities for education.

Through the Assembly agency, Uniting International Mission, and through a number of synods, these issues are being addressed together with broader campaigns to see Australia’s aid to Indonesia increased and support for Papuan asylum seekers.