US TV show on priest with problems stops after protests 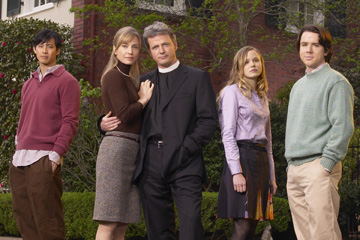 Conservative critics are claiming victory over the closing of a new prime-time US television series that depicted the life of an Episcopal (Anglican) priest, with a host of family problems who held long conversations with a seemingly hip Jesus.

"The Book of Daniel" show, which debuted on 6 January but only aired four of its eight scheduled episodes, provoked howls of protest from groups such as the American Family Association (AFA) which orchestrated a campaign to cancel the series. The National Broadcasting Corporation (NBC) received 678 000 angry e-mails from family association supporters, prompting advertisers to pull out and a number of NBC affiliates to refuse to run the show.

Ed Vitagliano, an official with the AFA, said the series mocked Christianity and he criticised the Daniel character. "I don’t know anybody this dysfunctional in my over 20 years in the ministry," he said in an interview with the Los Angeles Times. Vitagliano noted that the series was "not a realistic portrayal of a minister’s life. This was so far beyond the pale, it was almost a comic strip version".

The series featured actor Aidan Quinn as the Rev. Daniel Webster, who sought advice from Jesus on his sometimes troubled marriage and his rocky relationship with his three children – one gay, one sexually promiscuous and one dealing with drugs.

Addiction was a serious problem in the Webster household with the reverend himself apparently dependent on pain-killers, while his wife "really likes her martinis," as one Texas television critic wrote.

Also on the series, Rev. Webster locked horns with the first female bishop in his diocese, Beatrice Congreve, who was played by Academy Award-winning actress Ellen Burstyn.

Facing criticism after the first broadcasts, series’ creator Jack Kenny defended the show explaining, "Most everyone seems to understand that this is not any kind of attack or mocking of Christianity, but rather simply a fictional story in which the characters happen to be Christians."

As controversy grew Kenny tried to rally support, pleading with fans to lobby the network and calling the "bullies" who sought to kill his show "un-Christian and un-American". But the series never established a substantial audience base.

"Whatever the outcome, I feel that I accomplished what I set out to do," wrote Kenny in a blog on NBC’s home page. "A solid family drama, with lots of humour that honestly explored the lives of the Webster family. I was proud of our product."

Photo : The Book of Daniel show axed from prime-time US television