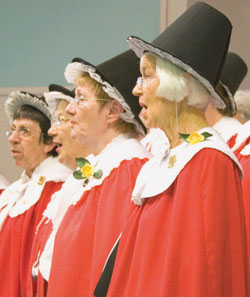 Brisbane Welsh Singers sang their final concert to a full house at Bayside Uniting Church on Sunday, 9 October in a celebration of singing presented by the Saint David’s Welsh Society of Brisbane.

The all female choir has been in operation for seventy years and has sung for everyone from royalty and at Brisbane’s Expo ’88 to the community in Murgon.

The Apollo Male Choir and the Moreton Bay College Senior Primary Choir also sang on the day, in a mixture of Welsh and English, with the congregation joining in for some rousing hymns and, as is tradition, starting with the Welsh national anthem and finishing with a sacred piece.