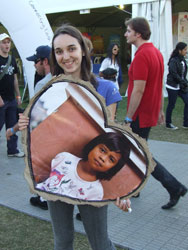 As part of the Together on the way, enriching community process to discern the direction of the Uniting Church in Queensland, Journey invited people to explore the five phrase Call through a photographic competition. The competition, launched late last year, asked people to submit photos representing each of the five sections of the Call – Uniting in Christ: acting with love; living with hope; witnessing in faith; working for justice.

We are now pleased to announce that the winner is Matt Gees for his photo depicting the phrase “working for justice”.

The aim of the competition was to creatively explore and present the church’s Call and how that can be interpreted by different people. While attending Easterfest, Mr Gees saw a moment he felt captured the church in action.

“Compassion Australia was encouraging attendees of Easterfest to consider child sponsorship and release a child from poverty in Christ’s name,” he said.

Mr Gees wins a Canon digital camera and other entrants received a Canon prize pack. The winning photo and highly commended photos by Christine Murphy, Rob Callow, Lewis Yu, and Alex Baker are on display at the new JourneyOnline website. The new site provides space for photo galleries, video and audio, as well as news from the local church and around the globe.

Communication Manager, Mardi Lumsden, said the team is excited about the new site.

“It means we have greater capability to use multi-media in our communications and incorporate our social media channels more easily,” she said.