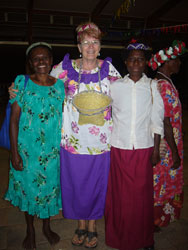 IN AUGUST, 14 people from St Andrew’s Uniting Church on Thursday Island visited Saibai Island, in the Top Western Group of islands in the Torres Strait, for a religious program organised by Lima Uku, the wife of Pastor Lindsey Uku of Sigabarduru United Church in Papua New Guinea.

After much preparation and paperwork, including writing to the Chairman of Saibai Island to obtain permission to visit, a groupof 11 women, two six-monthold babies and one man from St Andrew’s headed to the event.

“We were welcomed by a guard of honour of women who sang us into the hall.

Our number seemed so small with there being about 50 ladies from Sigabarduru,” she said.

“How humbling it was for us to be invited to serve ourselves first at the dinner table.”

This inaugural event saw women from Sigabarduru and Mabadawan, in PNG, and Boigu Island and Duan Island, in the Torres Strait, as well as women from Saibai Women’s Fellowship.

Ms Bryde said Pastor Uku’s message during the worship service encouraged women to be who God is calling them to be.

“To be bold women for God,” she said.

“Worship was a lively affair with much dancing and rejoicing in the Lord.”

Teaching included sessions on women in prayer, tithing and offering, women in faith, and faith in action.

“Each 30 minute session was led by a different speaker who inspired us all.

We all enjoyed more singing and dancing after the sessions.”

A long night of singing, dancing and worship drew the event to a close.

“There were many tired ladies and men but there were many who were awakened and blessed by God over the two days,” said Ms Bryde.

“We had come together and shared our common love for God.

To be part of this program was such a privilege and such a blessing.

“We from Thursday Island felt blessed by the generosity and love poured out on us.

We are praying that this is just the beginning of the times we can have together.”