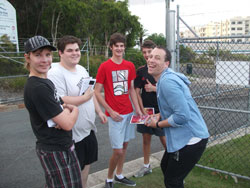 ALEXANDRA Park Conference Centre on the Sunshine Coast was inundated in January with more than 200 Uniting Church young people for Summer Madness 2012.

Organised by a team of youth leaders and people with a passion for helping young people experience God, the camp was a huge success.

Over four days, high school aged youth and their leaders experienced the theme Ignite and were challenged to find where
their passion for serving God lay.

One of the organisers, Youth and Families Resource Minister with the Mary Burnett Presbytery and Buderim Uniting Church, Rev Tim Griggs, said Summer Madness 2012 (SM12) was more than just a camp.

“All churches that attended SM12 were encouraged to take up the SM 25:40 Challenge,” he said.

“By responding to the Matthew 25:31-46 passage individuals and groups had the opportunity and resources to help them reflect, engage and act on each need.

“We really pushed to make it not just a great camp that lasts a weekend, but rather a network of people that are committed
to making a difference in our communities throughout the entire year, nay, our entire lives.”

Proserpine-Whitsunday Uniting Church minister Rev Wayne McHugh attended with some of his young people and said the event was truly inspiring.

“The campers, guest speakers/ performers and perhaps most of all the leadership of Summer Madness were amazing,” he said.

“My biggest thrill was in witnessing the awesome leadership team.

Summer Madness was no one’s ‘job’ (all leaders were either congregation based workers or volunteers) but they have taken the initiative and delivered a fabulous camp experience for this generation.

“It compels me to provide my support in whatever way I can to make sure that if Summer Madness 2013 happens it reaches more youth than ever, and that the leaders have more support than ever.”

One of the highlights for many people was guest speaker Shane Claiborne.

“Summer Madness was an incredibly amazing experience,” she said.

“Shane Claiborne inspired me to find what I am passionate about and spread that fire.

“Another aspect of the camp that I enjoyed was the worship from (guest band) Remember Seven and (worship band) Heist.

“I found it easy to connect with God and it helped strengthen my relationship with him,” she said.