Home > World News > An environmental agenda for the churches

An environmental agenda for the churches 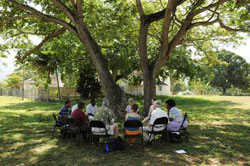 PEACE WITH the Earth was the focus of IEPC Bible studies and workshops on Friday.

Exploring how churches can positively respond to the challenge of climate change and environmental destruction was the aim of one of the workshops of the International Ecumenical Peace Convocation (IEPC) Friday in Kingston, Jamaica.

The content of the workshop called “Empowering Churches from North and South to advocate for Climate and Environmental Protection” reflected the theme “Peace with the Earth”, which was the overall focus of the IEPC on Friday.

The IEPC, which is being held 17-25 May by the World Council of Churches (WCC), the Caribbean Conference of Churches (CCC) and the Jamaican Council of Churches, has brought together some 1,000 peace activists and faith leaders from more than 100 countries in order to explore the role of the church in peacemaking.

The Empowering Churches workshop was one of more than 40 different workshops focusing on peace with creation. The organizers opened the Friday workshop with a short video showing how the initiatives taken by member churches of a missionary society in Germany, the United Evangelical Mission (UEM), impacted a small village in West Papua, Indonesia.

At the time of the initiative most of the inhabitants of the village did not have access to electricity. Through a shipment of solar-powered lamps developed locally in Germany to West Papua, electricity became accessible and the lives of many in the village and later the broader province were changed radically.

Rev. Dr Jochen Motte, the executive secretary for justice, peace and integrity of creation at UEM said that one of the aims of the missionary society is to empower churches in North and South to advocate for climate and environmental protection through concrete actions.

Providing a simple lamp in the middle of the house radically changed the habits of local people in West Papua, giving them more time to seize the day and develop other activities or spend more time interacting among family and friends.

The solar-powered lamps in Indonesia became one among a growing list of examples on how concrete efforts can make a difference, both within a community and for the sake of the environment.

Speaking on behalf of one of the member churches of the UEM, the Evangelical Church of Westphalia, the Rev. Dr Elga Zachau shared a powerful example of steps being taken locally in Germany.

Not only did project in Westphalia create awareness about the need to care for creation but also set new standards for the daily life of the churches, she said.

Zachau said there is now an environment-friendly label given to churches and organizations that reach a certain level of concrete commitment and action with the environment.

Named after the animal that traditionally sits as a weather vane on every German church spire, the “Green Cock” has become the symbol of an inspiring management programme. Each church adapts the programme to its specific needs and goals for energy saving and the reduction of their ecological footprint.

The Green Cock label has already been applied to more than 25 percent of the churches in Westphalia, including several Protestant churches and Roman Catholic dioceses. The label is accredited as a formal certificate of the European Union eco-management and audit scheme.

Motte said that the UEM is deeply inspired by the wider perspectives on climate change advanced by the ecumenical movement, such as the call from the World Convention on Justice, Peace and Integrity of Creation in 1990.

“Being part of the WCC working group on climate change, we believe that this issue should be a main focus of the ecumenical movement now, just like the issue of violence was a priority over the last decade,” he said.

In 2008, the UEM, which is associated with the WCC, promoted an exhibition on climate justice that has been shown on more than 70 congregations, churches, and institutions.

For the UEM and churches in Westphalia, taking concrete actions toward environmental sustainability is also taking a step in peace with the earth.

For live video streaming of the plenaries visit the IEPC website

Photo : Peace with the Earth was the focus of IEPC Bible studies and workshops on Friday.