Church-state ties will be on display at royal wedding 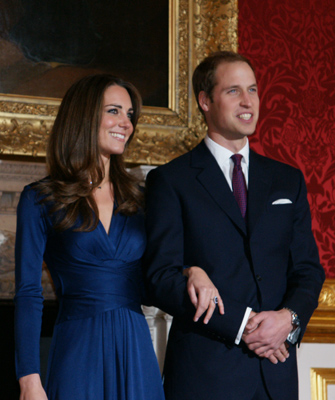 When Prince William and Kate Middleton walk down the aisle at London’s Westminster Abbey on 29 April, Britain’s unique and historic ties between church and state will be on full display.

Some here think — even hope — it could also be the last powerful stroll for church and state in this increasingly secular country, Religion News Service reports. As the Dean of Westminster, the Very Rev. John Hall, and Archbishop of Canterbury Rowan Williams prepare to conduct and solemnize the royal wedding, both Christians and prominent nonbelievers are demanding the disestablishment of the Church of England, which has dominated religious life here for 400 years.

In a special message issued for the royal nuptials, Williams underscored the historic ties between the church and state in England. "Since about 1300," he said, "the archbishops of Canterbury have had their London residence here in Lambeth Palace. The view from Lambeth Palace is straight across to the House of Parliament, Big Ben and, of course, Westminster Abbey."

In a powerful measure of Britain’s unique marriage of church and state, the parliament’s House of Lords contains 26 Lords Spiritual, all of them unelected men who also serve as bishops in the Church of England.

The assembled royals and bishops inside Westminster Abbey will reflect the close ties on both sides. Williams was appointed by Elizabeth in 2003 — her fifth appointment to Canterbury over nearly 60 years — on the recommendation of then-Prime Minister Tony Blair. Williams, in turn, or his successor, will one day crown the next monarch.

The queen became "Supreme Governor" and "Defender of the Faith" of the Church of England when she ascended the throne in 1952 — a title established in 1562 after King Henry VIII broke with Rome in 1534. "We hold it most agreeable to this Our Kingly Office, and Our own religious Zeal, to conserve and maintain the Church committed to Our Charge, in the Unity of true Religion, and in the Bond of Peace," the preface to the church’s Thirty-Nine Articles of Religion states.

Current Prime Minister David Cameron has expressed support "in principle" for scrapping the 1701 Law of Settlement restricting access to the throne by non-Catholics — a move Anglican leaders strongly oppose. The 1701 law also forbids heirs to the throne from marrying Catholics, on the idea that their royal offspring who are raised as Catholics would be forced to choose between loyalty to Rome and loyalty to the Church of England.

The presumed heir to the throne, Charles, Prince of Wales, is the longest serving heir apparent in history. He is married to Camilla Parker Bowles, a Roman Catholic. Opinion polls suggest most Britons want to see William succeed his grandmother as sovereign. For his part, William has expressed little concern about or commitment to either the Church of England or Christianity. Those close to the couple say they are, like their peers, quietly indifferent about religion.

A theologian who did not want to have his name used publicly quipped at a recent reception at Lambeth Palace: "Ever since Saul, David and Solomon, the Church of England’s ideal of a monarch is a man or woman with one eye on their subjects, the other on heaven."

For the most part, the queen leaves church operations to the Archbishop of Canterbury and other bishops, who have struggled in recent years to keep the Church of England intact despite deep differences over a move to allow female bishops. Williams, too, has wrestled with an independent-minded American flock in the Episcopal Church over the election of gay bishops. In former British colonies, Williams has contended with conservative archbishops who see themselves as leaders of the so-called "Global South" church.

When Elizabeth, 85, dies, many observers expect calls for the disestablishment of the church to grow, and perhaps succeed. Williams, the former archbishop of Wales, has indicated he’s not scared by the idea. "I spent 10 years working in a disestablished Church (the Church of Wales) and I can see that it’s by no means the end of the world if the establishment disappears," he told the left-leaning New Statesman magazine in 2008.