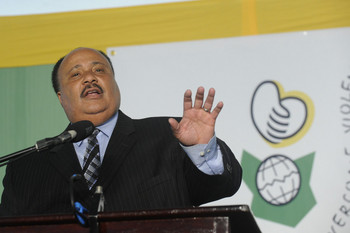 After losing his father, uncle and grandmother to violent and, in some cases, suspicious causes of death, Martin Luther King III still believes that that there is a higher and more noble way and that is to "dislike the evil act" but "still love the individual."

In the case of the recent killing of Osama Bin Laden, "it is hard to feel good about that," said King, the eldest son of slain civil rights leader Martin Luther King Jr.

King’s comments were made in a press conference following a keynote address Thursday which he gave to some 1,000 participants at the first-ever International Ecumenical Peace Convocation (IEPC) in Kingston, Jamaica.

"Because [the United States] said he was responsible for killing others, they assassinated him [Bin Laden]. A lot of people feel good about that. I find it hard to feel good about that," said King. "The U.S. had to address Bin Laden’s horrific actions in some way but killing him was not necessarily the best course of action," he said.

"Certainly something should have been done with Bin Laden but I just don’t know if [killing him] was good. I just don’t believe in an eye-for-an-eye and a tooth-for-a-tooth. If that’s the case, we’d all be without eyes and teeth," he said.

During the press conference, King urged churches, political leaders and citizens around the world to reach for that noble higher ground of nonviolence.

"We’ve got to reach higher. We’ve got to be better. We cannot continue to preach peace and practice war," he said.

King also said that, collectively, churches need to do a better job of promoting peace and nonviolence.

"I hope I state this in the form of a challenge. But we in the church community, those of us who are members, must do a better job of not just working to talk about peace but to actually to live and promote peace in a better way. Quite frankly, it’s not until a crisis occurs that people seem to come together," he said.

King said the church has a unique responsibility in bringing about peace. "Peace will not come by one entity. It won’t be the churches alone or the United Nations. It must be the entire community that must embrace peace."

Calling of a peaceful world

Recalling his parents and upbringing, King said that world peace might begin in individual homes. "I’m very thankful that my mother and father instilled in us certain principles and values around love."

After his father was killed, King said he was 16 when his grandmother was gunned down, and that his uncle mysteriously drowned a year after his father was assassinated. Throughout the loss in his life, King said, "I have considered these as examples that taught me to dislike the evil act but love the people."

King believes that nonviolence is not an unreachable ideal but a viable way for individuals and entire countries to resolve their conflicts.

"I believe that one day our people, human beings, will look back on our society and say that, at one time, we did go through archaic behavior, that violence is a thing of the past. We always have to immerse ourselves in truth. We know what is right and what is wrong," he said.

The peace movement will be rooted in the next generation of young people, King added, and they should begin immersing themselves in the many existing methods of peace and nonviolence.

Peace could well become the focus of social media for youth, he said. “We have to make this world a better place. Tweet what people are doing. It’s young people who are going to lead this struggle. It’s your calling. Every generation has a calling. Maybe this generation’s calling is a peaceful world.”