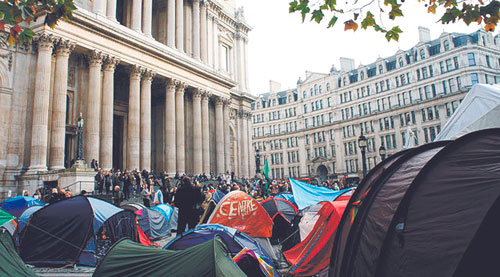 A group of faith leaders announced in May that they would be making a pilgrimage from London to Canterbury in June to protest unjust economic systems in the 21st century.

The group, called Occupy Faith, met at St Paul’s Cathedral in London with the permission of cathedral authorities, in contrast to last year’s four-month clash between clergy and Occupy protestors outside the cathedral.

The 62-mile Occupy Faith Pilgrimage will start at St Paul’s on 7 June and end on 20 June at Canterbury Cathedral, site of Archbishop Thomas Becket’s 1170 assassination and a pilgrimage site ever since.

Members of the Anglican, Catholic, United Reformed, Quaker and Methodist churches will be walking alongside members of the Jewish, Muslim, Sikh and Buddhist faiths.

Pilgrims will stay in churches or camp on open land, Occupy Faith said.

Rev Paul Nicholson, chair of the Zacchaeus 2000 Trust, an ecumenical charity campaigning against poverty in the UK, said,

Londoners are squeezed out of their homes into uncertainty, debt and who knows where.

We want that to stop.”

Rev Kevin Snyman from the United Reformed Church in Wales said there was also a strong spiritual dimension in the pilgrimage.

“We are at a very exciting stage in history. I believe we are in a spiritual battle at the moment … Politicians come to power with good intentions but they cave in. What we are doing here is shining the light of prayer on the injustices taking place in the world.”

“Whether it was campaigning to end slavery or apartheid or helping the poor and the sick.

“We believe that faith groups are a progressive force for change and are instrumental in highlighting the economic and social inequalities that exist today.

“We hope that all communities will support this initiative.”

Occupy London protesters camped in front of St Paul’s Cathedral in London were removed from the site in February.

Photo : In May the Occupy Faith protesters launched their pilgrimage at St Paul’s, where they will begin their journey. Photo by Peter Trimming