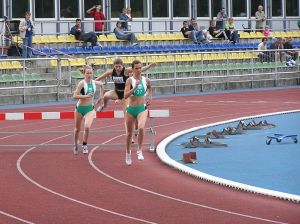 IN a BBC radio broadcast today, Anglican canon Duncan Green called on people everywhere in the world to live together in peace and harmony, in the spirit of the Olympic Games.

"I was very moved last week when the Christian chaplains on the team helped their Muslim colleagues prepare a large hall for the Friday prayers of Ramadan.

A young Muslim man hugged me for providing such a facility.

This week, I've witnessed young men and women from all over the world living side by side, greeting one another, making new friends, laughing, and sharing their love of sport. I pray that the world will watch and learn to live in harmony."

The Multi-Faith Centre at the Olympic Village will be run by 50 chaplains working on shift around the clock and catering to the spiritual health needs of athletes from countries where Judaism, Islam, Christianity, and other religions prevail.

A group of Christian churches working under the name "More than Gold" helped organize a prayer relay. Services were held and prayers said as Olympics torch bearers made the journey from Land's End to London.

Many of the Church of England's parish are planning events to coincide with the Olympic Games, while Anglican and Roman Catholic churches are organizing "large screen" festivals which will bring together as many as 500,000 people.

British churches will not be doing all of this on their own; they will be supported by thousands of volunteers from Britain, the U.S., Latin America, and Scandanavia.

Christian churches are providing free accommodation for more than 350 family members of athletes who would otherwise not been able to attend the Games because of costly hotel prices.

One chaplain, Rev. Janet Binn, told the BBC: "I'm looking forward to spending time with the athletes, to be to offer pastoral care, to be able to listen and help them as much as I can."

A keen marathon runner, Binn added: "As an athlete myself, I feel that in order to compete at that level there has to be something else that motivates you and keeps you going, something that lets you turn away from the normal things in your life.

"For some athletes, especially those who are spiritual, and there are a few, their spiritual aspect will play a big part in their competition."