Toilets make a world of difference 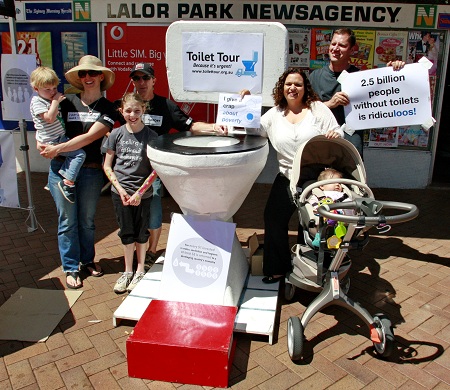 LACK of access to a safe, hygienic toilet is the leading cause of death for thousands of children around the world every single day.

On World Toilet Day, which was on 19 November, the Micah Challenge coalition encouraged Australian Christians to join the call of hundreds of organisations around the world, for governments to increase the overseas aid allocated to adequate sanitation and safe water for the world's poorest people.

"World Toilet Day is a good time to focus our attention to the 780 million people around the world who lack access to safe water and the 2.5 billion people who do not have decent sanitation," said John Beckett, National Coordinator of Micah Challenge Australia.

"The Australian Government committed to help halve the proportion of people in the world who don't have safe water and basic sanitation by 2015.

While the clean water target is on track to be achieved by 2015, the sanitation target is significantly lagging behind," said Mr Beckett.

"With around 3,000 children dying every day from preventable causes related to dirty water, poor sanitation and lack of hygiene, we're calling on our government to invest more of Australia's aid budget into water, sanitation and hygiene."

According to Mr Beckett, by prioritising investment in sanitation, Australia could help save lives and restore health, dignity and opportunity to millions of families and communities in the developing world.

Over the past six months Micah Challenge has been raising awareness of the global sanitation crisis and gathering petition signatures through its national Toilet Tour in partnership with WaterAid Australia.

Touring through every Australian state, the giant 2-metre high toilet has featured in over 35 community-led 'Give Poverty the Flush' events and raised awareness among tens of thousands of Australians.

"The Toilet Tour is a light-hearted and effective way to start a conversation about this very serious issue, and we've seen an incredible amount of community support for achieving the Millennium Development Goal target for sanitation," said Mr Beckett.

"The campaign will culminate on World Water Day – 22 March 2013 – when we will present the petition signatures to Foreign Minister Bob Carr prior to the formulation of the Federal Budget in May."

To add your voice to the petition calling on the Australian government to address the global sanitation crisis, visit http://bit.ly/toilettourpetition.