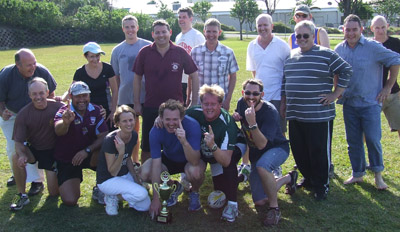 Synod wouldn't be the same without the City vs. Country touch football game, named after the mythical (some say legendary) former Trinity student Charles Farnsworthy.

Despite the game being used as an example for the whole of synod on consensus voting practices on Friday night, it was uncertain whether Country would have enough starters. Thankfully, Country rallied and was able to provide a team to maintain their hold on the trophy and bragging rights.

Former Country player Paul Clarke revelled in being back in the City team (some suggested that Country would now be stronger) and rallied teammates Tim Robinson, Lu Senituli and John Dansie in leading the charge. City opened the game at a fast pace, but were kept in check by referee Linda Hanson (despite being without a whistle). Clarke scored first points of the match, but the celebrations were short lived as Country's Greg Adsett scored quickly surprising a complacent Senituli.

Country continued their embarrassment of City's much fitter looking team after a marvellous display of showmanship and footwork from Tim Robinson backfired. A comment from the sideline questioned City's fitness after asking Deception Bay's Dansie why he was sweating more and breathing harder than the older guys on his team. He admitted only to running harder.

A confusion of sports almost cost Senituli his place on the team after a volleyball-esque spike almost lost a try, but a quick footed John Ruhle recovered the ball and scored for City. A late substitution on by Greg Rankin was Country's secret weapon as no sooner was he on the field; he had assisted "Hoops" in crossing the line again.

Country led at half time not showing the effects of the warm midday sun, City on the other hand feeling the pressure saw Peter Lockhart flat out on his back bemoaning the youthful exuberance of the Country team (and wanting oxygen and Summer Madness' fundraising coffee, in that order). He quickly recovered though and as the second half began, so too did City's resolve. They pushed hard against Country forcing mistakes but the on field encouragement from Jim Pearson rallied Country, forcing an out of bounds run from Robinson and a try disallowed by the ref. "Hoops" and Tim Griggs scored in quick succession taking City by surprise again and cementing their narrow lead.

By the end of the game, City had been outclassed once again and Country were able to take home bragging rights and their place on the trophy winning the match 6-4. In post match interviews, Tim Robinson from Logan Uniting Church commented that his running was impaired by eating too much of the fine cuisine offered by Alex Park staff, but also admitting that Country were "a much fitter team, the score didn't reflect the true competiveness of the game … Country beat us far more convincingly than that". Both City and Country had strong representation from across the Synod, although heads were being scratched at Scott Guyatt's choice of a Lions AFL Guernsey for the game. Spectators were up on previous matches with many intrigued passers-by stopping to witness the spectacle that is the Charles Farnsworthy Memorial Cup.