Services of the future 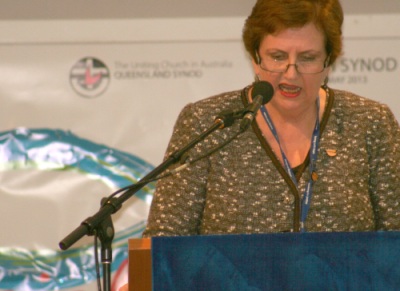 The UnitingCare Queensland report to the 30th Synod provided an insight into the implications of the significant changes underway in aged care, disability, health care, child protection and the regulation of charities.

UnitingCare Queensland CEO Anne Cross reported on a range of key areas impacted by the changing landscape of community care in an environment of increasing fiscal restraint.

"Both UnitingCare Community and Wesley Mission Brisbane have had cuts to programs funded by the Queensland Government," she told Synod members.

The most significant impacts have been cuts to aged care, exacerbated by significant shifts in federal funding which removed the indexation of aged care funding for the 2012/13 financial year and adjusted the funding to effectively pay less for each person's care.

While the Queensland Government has rejected the sale of major assets without a mandate from the electorate, it has accepted the principle of "contestability", she said, which means that many services currently operated by non-profit providers may be re-tendered to test "value for money" outcomes.

"I would expect that there will be significant changes in the landscape of who provides what."

She predicted that there would be a growth in "for profit" providers in community services and more mergers and partnerships as providers seek to gain market share in a reconfigured service provision.

Ms Cross said that in such an environment, the work of UnitingCare at both state and national level continues to be influenced by what it means to be a Uniting Church agency.

"Under pressure of increasing financial stress we grapple every day with continuing services that are not really viable but which are important to 'who we are'," she told Synod members.

"We also continue to invest in all sorts of 'unfunded' activities including chaplaincy, in pastoral care, in research, in policy and advocacy on a wide range of important issues that are important for the wellbeing of people and the community."

The UnitingCare report included updates on important governance issues including a draft framework to clarify the relationship between Synod and UnitingCare, and the establishment of a Quality Board to support the strategic objective of becoming a leading organisation in person-centered care.

Innovations and improvements to community services across Queensland, including new Blue Care community centres and renovations to existing facilities were outlined.

"We have a significant program of transformational work underway that will enable us to evolve the UnitingCare services of the future," said Ms Cross.