Shaping our future in schools 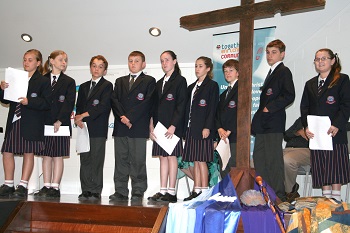 Drawing on the Uniting Church in Queensland’s Vision 2020, Mr MacGregor said the focal points of Uniting Church schools are “local and wider partnerships with our Indigenous brothers and sisters, environmental issues, enhancing our spiritual leadership capacity and enhance the worship and prayer life of the school community”.

Currently, there are thirteen schools and residential colleges in which the Commission interacts.

Mr MacGregor said that since the 29th Synod, the Schools Commission has endeavoured to work within the framework of the Together on the way, enriching community journey while carrying out its routine tasks.

One of the biggest challenges and joys for the schools Commission in the last few months has been its increased involvement in Shalom Christian College, Townsville.

Shalom is a co-educational P-12 school founded in 1992 by the Congress Community Development and Education Unit (CCDEU) which provides a culturally inclusive curriculum for Indigenous students.

In 2012 CCDEU went into voluntary administration and requested the Queensland Synod to assist to continue this, and other, valuable services.

Schools Commission Executive Officer, Elaine Rae, said her involvement with Shalom has opened her eyes and heart to issues facing Indigenous students and she has valued the wisdom of the school’s leaders.

“I’ve had more conversations with my Indigenous brothers and sisters in the last eight months than I have ever had in my role,” she said.

Ms Rae said that the most significant work has been working with the other synod departments, the administrators of CCDEU and government agencies to ensure the continuance of Shalom Christian College in Townsville.

“I want to honour that this has been the case for the 25 years that Shalom has been in existence.

“I want to honour Dennis Corowa who has been with us along this whole journey.

“I want to pay tribute to Denis in this forum as he’s been such an integral part of this process.”

According to the Synod Schools Commission report “the biggest challenge is to continue to maintain the routine processes for effective boards given natural turnover while often dealing with unforeseen issues.

“This same challenge applies to succession planning for the Commission and staff.”

Schools Commission member, Annette Dale, said some students from Moreton Bay College “donate clothing, mobile phone and toiletries as a means of helping recipients of the Yalari scholarship adjust to life away from home”.

Yalari is an independent organisation that offers Indigenous children from regional, rural and remote communities and towns the opportunity for a first-class secondary education through scholarships to attend some of Australia’s leading boarding schools.

“Students from Somerville House volunteer weekly at the Mater Hospital, working in the wards and in administration.

“There has been installation of energy efficient split air conditioners to the whole of primary and establishment of a school environmental group as part of the education process,” Ms Dale said.

“Twenty year 11 students participated in a full day conference on being a spiritual leader which was organised by the Bible Society,” he said.

Wendi Sargeant, chaplain at The Lakes College, brought a group of Year Seven students to show Synod members what they had learned as part of their ongoing spiritual development program in a unit en titled “what is the Uniting Church in Australia?”

The students explored a range of different topics including the emblem, structure, the Basis of Union and Uniting Church agencies, networks and activities.

One of the students reflected intelligently on the meaning of the Uniting Church emblem and added that she also thought it looked a little like a smiley face, representing the smiling faces of members in the Uniting Church.

The presentation concluded with one student saying “the Uniting Church describes itself as pilgrim people on a journey. Let us be pilgrims”.