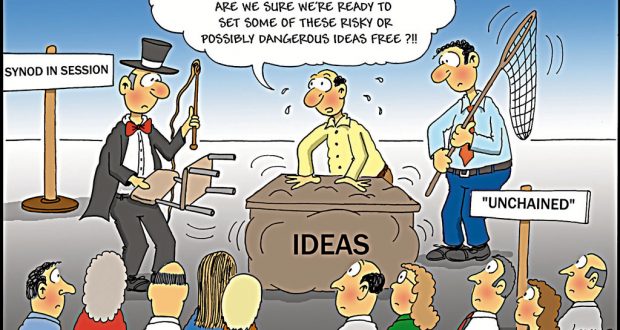 A new forum to explore outside-the-box thinking was a smashing success at Synod. Journey reports.

Hundreds gathered for Unchained, a half-day festival held during Synod in Session to air dangerous ideas about how the Uniting Church might re-imagine itself and its place in the world.

The event evolved from a suggestion first made by the moderator that the Synod needed a “festival of dangerous ideas” and was developed by working groups into “Unchained”.

For the workshops component, an eclectic mix of topics covering church polity, social justice and theological issues was presented by speakers from across Queensland.

South Moreton Presbytery multicultural officer David Busch and Sharyn Robinson from the Multi-Cross Cultural Reference Group launched their session with some vigorous dancing as they explored the concept that embracing “the other” is more about having fun than being perfect.

“Only half of Australians have grandparents born here,” said David. “To be mono-cultural is to be on the margins.”

The presentation “The Jihad of Jesus” by author Dave Andrews challenged Christians to come together with Muslims to re-claim the concept of “jihad” from extremists.

Dave pointed out that Islam embraces Jesus as an example of non-violent resistance.

“I believe that Muslims and Christians can join together to discover Jesus as a messiah who embodies the spirit of mercy and grace, and we can find that as a common ground in working for the common good,” he said.

Synod research officer David Weddell challenged people attending his session to consider whether we should close our churches on Sundays.

“What are the things we can do to connect people to the message of Jesus but are not necessarily to do with our Sunday service?” asked David.

The event wasn’t all talk. The virtual reality exhibit stimulated members into challenging assumptions of their physical reality by donning a headset and launching into an immersive underwater experience encountering sea creatures lurking in the deep.

As crowds feasted on festival food they were treated to live music and soapbox speakers under a canopy of fairy lights.

The night concluded with a guest performance in the outdoor chapel by slam poet Joel McKerrow, who moved audiences with a rousing series of poems summarising the key themes of the event’s discussions.