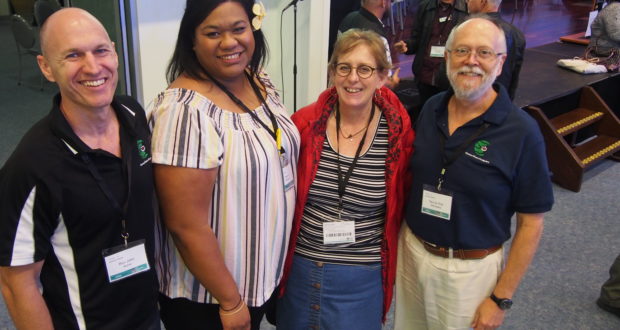 Since the last Synod in Session, the Presbytery has used the Synod Priority Directions to guide the development of their mission statement, guiding values and mission priorities. The document draws on the work done in the Presbytery consultation report by Spirited Consulting (Carolyn Kitto) at the November 2016 Presbytery meeting, conversations at ministers’ retreats in 2016 and 2017, and work done by the Presbytery staff and during the Presbytery Standing Committee planning days.

“The Let it flow theme picks up on the image of the rivers in the Moreton Rivers Presbytery logo, also on the idea of wanting to join ‘in the flow’ of where the Spirit is already at work in bringing life-giving water to mission and ministry,” said John Ruhle in the report. “It is about having a ‘strengths-based approach’ to setting the mission priorities of the Presbytery.”

The plan was adopted at the Presbytery meeting on 29 July 2017 and is not intended to be a ‘linear plan’ but rather a framework providing sign posts towards the future.

Action points to achieve these priorities include the creation of a number of Presbytery roles focusing on youth and children’s ministry and mission education and mission development. Presbytery will also encourage the development of fresh expressions of church and greater engagement of Mission Shaped Ministry education by ministry agents and congregations.

In John’s assessment of the risks and challenges ahead, he noted that these revolve around people rather than property or finance.

“A number of congregations are struggling to have the people resources to provide sustainable ministry and mission in their context,” he says in the report.

“We are also finding a lack of suitably trained people to take on ordained ministry roles within the Presbytery.

He noted, “The challenge of having suitably trained people for ordained ministry is being partly met through an additional focus on people entering into their Period of Discernment (we have a POD coordinator employed by the Presbytery part-time) and also by supporting the initiatives of Trinity College Queensland.

“Coupled with this, the Learning for Living course and Mission Shaped Ministry training are helping congregations to be equipped for mission and ministry in their own context.”

Rob McFarlane said they are in discussions about a Newlife Uniting Church church plant in Brisbane’s CBD.

John finished the report by talking about some exciting projects including a new missional position based at Ashgrove West Uniting Church and the new North Lakes Uniting Church building.