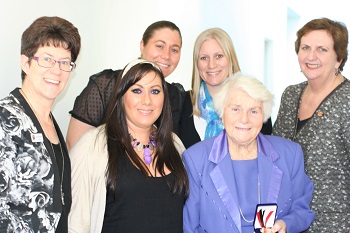 Valued volunteers from the Uniting Church and UnitingCare Queensland service groups from around the state were nominated for the Moderator's Community Service Medal in record numbers this year.

A total of 46 nominations (including three couples) were made – double the numbers received for the last Moderator's Medal held in the lead up to the 29th meeting of the Queensland Synod in October 2011.

Colleen Geyer, Director of Mission, UnitingCare Queensland and chair of the judging panel, said that the task of selecting the finalists was exceptionally difficult.

"The standard of entries was incredibly high and the judges felt that every single nomination was worthy of a Moderator's Medal," she said.

After much deliberation, the judges recommended 11 people to the Moderator to be this year's recipients, four of whom were presented with their medals at the 30th Synod worship service at Unity College, Caloundra on Sunday 26 May.

These were Peggy Skinner of Noosaville, Patricia Flint of Mooloolaba, Marie van Alphen of Indooroopilly and Jean Vallis of Mitchelton.

"There were a number of people who made it to the final round of the judging and who were very worthy of recognition so we suggested that the Moderator could award certificates to them and our recommendation was accepted" Colleen said.