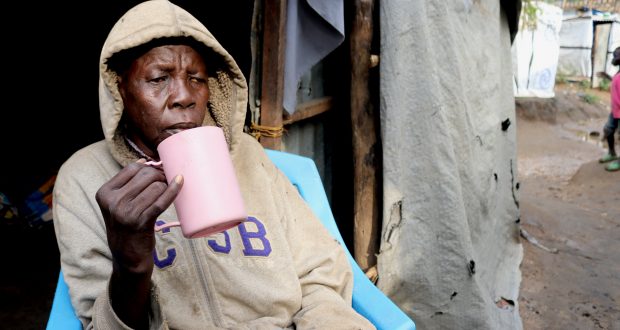 Seven million people are at risk of starvation in South Sudan and while the world looks away, the global community of faith—including Queensland congregations—simply won’t. Cath Taylor writes.

“We aim to promote peace and unity, both here in Australia and in South Sudan,” says Rev Moses. “We’ve cooperated with other congregations and with UnitingWorld to pray and raise money for our home, where so many are still suffering.”

Rev Moses and his family arrived in Australia in 2003, fresh from a refugee camp in Egypt. Born in a village in South Sudan, Moses lived and worked in Khartoum, where he became a Christian and was baptised in 1979. In 2003, South Sudan hadn’t yet gained independence from the north—brutal conflict was still claiming the lives of thousands of people. By the time his nation was granted sovereignty, Rev Moses was a permanent resident in Brisbane and had found refuge at St David’s Uniting Church in Cooper’s Plains.

Now an ordained minister, he calls on his brothers and sisters in Christ to hear urgently from those who are in the midst of a new humanitarian crisis unfolding in South Sudan. Conflict has choked roads, borders have closed due to COVID-19 lockdowns, and drought, locusts and floods have destroyed food supplies. Millions of people are desperately hungry.

The Uniting Church and the Presbyterian Church of South Sudan

“My name is John. I live in Juba, the capital of the world’s youngest nation, South Sudan.

This week, the PCOSS team and I spent time traveling to meet with people who’ve had to leave their homes because of constant fighting—many villages are burnt and homes looted.

This is Ida, who lives here as a refugee with many others, a long way from her traditional home. There are four million people living in camps like this inside South Sudan and 1.9 million others have fled across the borders to Kenya or Ethiopia as refugees.

Food and water in the camps, but also in the cities, is hard to find. In recent months, drought and a devastating locust plague have destroyed our crops. Water pipes, wells and reservoirs are old and broken, so our women and girls walk long distances to find clean water to drink. We have so few resources that we have to rely on our neighbouring countries for food, water and diesel to power our electricity generators—but with renewed fighting, roads are closed and nothing can get through.

For Ida and so many other people, hunger makes responding to the COVID-19 pandemic even more difficult. People don’t understand the seriousness of the disease; they don’t have money for masks or tests. The team and I are spending time distributing masks and educating people about the disease and its symptoms. As the fighting grows worse as people struggle for control of the land and livestock that will keep their families alive, both hunger and disease threaten huge numbers of people. Providing people with emergency supplies, food and water, is as critical as keeping them safe from disease.

For several years, with support from the Uniting Church in Australia through UnitingWorld, PCOSS have been running peace workshops, offering trauma counselling and training leaders who will help heal our countries wounds. We were at the centre of peace negotiations in 2012, and people listen to us because we look beyond the tribal groupings to the worth of every human in God’s eyes. At the moment we can’t run our workshops, but as soon as it’s safe, we will return to our training. The future of our country depends on peace, and we are called by God to nurture the leaders who can help make it happen. Right now, we are spending all our time working to help people simply survive this crisis.”

Queensland congregations and faithful individuals have a long history of faithful giving and prayer for our brothers and sisters in South Sudan. John and Caroline House are just some of many regular Queensland donors to Uniting Church work through UnitingWorld, and they say: “We’re from Australia and have not been to Sudan or South Sudan. But we were excited by South Sudan’s release from Sudan and are sad that so far, this new freedom has been disappointing. We are hopeful that good change can and will happen, and by the mercy of our Father in heaven, we would like to be helpful, even if only a little.”

A call to shine brightly

Reverend Moses and the community at St David’s are calling for God’s people to shine bright in a world of desperate need.

“As brothers and sisters in Christ, it is our duty to share with those who need it,” Rev Moses declares. “Matthew 5:14 says ‘You’re the light of the world!’ Where we have capacity or an opportunity to help, we cannot shy away. Over the years, Uniting Church people have clearly demonstrated they stand with us in times of need. COVID-19 has introduced more problems for us, and we ask everyone to pray that God will bless South Sudan with peace, love, understanding and wisdom so that we are able to help ourselves through this crisis.”

If you can be part of the move to end hunger and keep people safe from disease, please give at UnitingWorld.

South Sudan by the numbers

65 per cent of the population face critical food shortages

4 million forced from homes into cities or camps in the countryside.

1.9 million South Sudanese living in refugee camps outside the country