Saved by a sonic screwdriver 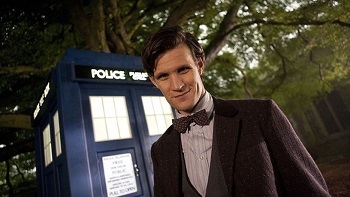 “And you are forgiven. Always and completely forgiven.” (The Doctor, The Wedding of River Song)

Who is this man with the power to forgive?

Doctor Who is the solitary traveller whose name is unknown, the immortal who brings reconciliation and healing out of conflict.

The Doctor is the last of his kind. Now in his eleventh incarnation, played by Matt Smith, the time lord travels across time and space in the TARDIS (Time and Relative Dimension in Space) armed solely with a sonic screwdriver.

The success of Doctor Who, re-launched in 2005 by Russell T. Davies, owes much to imaginative plots and a geekiness that runs close to self-parody.

Yet fans of the Doctor are fervent in their insistence that there is much more to Doctor Who.

The new series has certainly injected new-age sensitivities, along with stretching the concept of time travel.

Even the Daleks, whose sole purpose is to rule by exterminating other species, have mellowed. “I never thought I’d feel the sunlight again,” says Rose, one of the Doctor’s companions, after fleeing an underground vault.

“How does it feel?” asks the dying Dalek, confronting the viewer with the possibility that redemption exists even for one such as him.

But it is the Doctor himself who evokes what can only be described as a spiritual response.

He looks human, yet his “otherness” sets him apart from enduring friendships and love.

He is the immortal who saves others, but must die before he can be transformed into the next incarnation.

The late mythologist Joseph Campbell pointed out that many themes appear in stories told by widely scattered peoples, drawing on understandings that lie at the heart of what it is to be human.

The Doctor embodies elements of the hero, the unknown God, the teacher, and the saviour.

Like a loving, forgiving God, he views the human race with affection and exasperation, yet is convinced that we are worth saving.

Thus we respond to this charismatic character, and are moved, at a level which transcends a simple television series.

“While Doctor Who is not the work of theologians, the mystery of who is the Doctor invites viewers to ponder why does the Doctor do these healing and redemptive acts,” writes blogger Philip Johnson in TARDIS: Theology and Relative Discourses in Space.

“In a similar way, readers of the gospels are invited to ponder on who is Jesus.

In a world searching for heros, a story about one whose love transcends even death will always find an audience.

The Doctor Who 50th anniversary special will air in November 2013 on ABC television.