William Booth and his Salvation Army 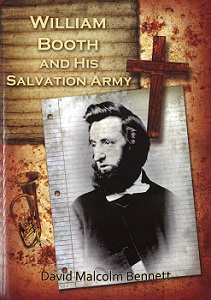 This fascinating book was written by Brisbane author David Malcolm Bennett. While being historically accurate, it is written in an easy fiction style which charts the life and work of William and Catherine Booth from the beginning of their mission in England in 1865 to the death of the General in 1912.

David Bennett, himself the son of poor parents, understands the world into which Booth immersed himself, London's East End in the Victorian era where crime, poverty and prostitution prevailed.

Booth preached a Gospel of redemption and holiness as he and his wife became independent evangelists after they left the Methodist Church.

As their work grew, it was necessary to raise up and train leaders from their own family and other believers.

In 1877 posters went up in Whitby, England inviting others to join the Hallelujah Army, but when a Christian magazine named them the Salvation Army, they took that title from 1879.

This book details the ability of Catherine as a speaker, shows the challenges of reaching out to America, then Australia, India and the world, and Booth's response to child prostitution, homeless men and drunkards.

Over his lifetime, Booth met Kings and Queens, Presidents and Prime Ministers.

During these visits, Booth stood for his faith unfailingly and gradually got his way.

William Booth and his Salvation Army is highly recommended.