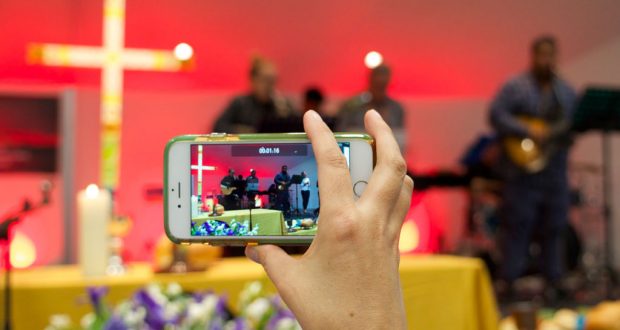 Enriching dialogue and diversity reigned at the 32nd Synod meeting (20–24 May) while future directions were confirmed. The Journey team was there to cover the event.

The Alexandra Park Conference Centre on the Sunshine Coast was packed with hundreds of Uniting Church members from across Queensland. The tea urns were switched on and the blue and orange cards were ready for hoisting. As moderator Rev David Baker remarked, it was the gathering of the tribe: Synod in Session.

Synod is held every 18 months, and the gathering began with a powerful reminder of who we are and why we journey together. The dramatic opening worship emphasised the multicultural diversity of the Uniting Church with songs from Tongan, Korean and South Sudanese choirs.

A Samoan symbolic time of confession known as “sitting under the mat” was performed as a straw mat was placed over Terani Lima, Rev Dennis Corowa and the moderator.

During his sermon David told members, “Being a multicultural church is not so much about cultural diversity as it is about being so close with Christians of other cultures.

“We are all better able to question our cultural assumptions and put them under the light of the gospel. We’re a better church, not simply a more colourful one.”

Members were faced with two considerations concerning the moderator-elect. Beyond the regular choice of nominations, there was an initial proposal to allow optional re-election of a moderator after their first threeyear term.

Much discussion ensued and after the decision failed to reach consensus the Synod moved to a formal ballot.

The proposal subsequently passed by a significant margin and current moderator Rev David Baker was eligible to stand alongside other moderator-elect nominees, Rev Lyn Burden and Rev Dr David Mackay-Rankin.

On Sunday members elected David Baker as moderator for a landmark second term, until the 35th Synod in October 2020.

Members also approved the appointment of a new general secretary, Rev Heather den Houting, to replace Robert Packer who will vacate the position on 31 May 2016.

Members of the general secretary selection panel addressed the room on how Heather comprehensively met all facets of the selection criteria.

“Heather has demonstrated a deep passion and love for this church and knows and loves it well. She appreciates both the polity and theology of the Uniting Church,” noted selection panel member David Baker.

“She has the gifts and graces required for this role,” added Rev Linda Hanson, another member of the selection panel. In response to the appointment—which will begin 1 June 2016—Heather told members, “When we say the words ‘together on the way’, I want you to know I work best in the together space.”

“Obviously there is significant change within society itself,” said Craig Barke, chair of the UnitingCare Queensland board. “We are responding to those changes and we are holding on to the mission which has been provided to the organisation with an endeavour to remain financially sustainable over the long-term.”

UnitingCare Queensland CEO Anne Cross detailed the organisation’s future plans including the implementation of revised service models, consolidation and leveraging of the investments that have been made in hospitals, strengthening their presence in major regional centres through an integrated range of aged-care services and consolidating sites where possible.

“This recognises what the Uniting Church has contributed to Queensland communities through Blue Care for over 60 years—many of you here are part of that story.”

After fervent discussion the 32nd Synod passed by consensus revised priority directions for 2016–2020.

Brought forward by Rev Andrew Gunton on behalf the facilitation team, the original wording of the proposal was amended to reflect the concerns of members.

Consensus was not initially reached as numerous members expressed their concerns on the implications of certain phrases and words, lack of qualitative and quantitative data to discern how the church has traveled with priority directions in the past and the absence of words such as “spirituality” and “growth”.

Rev Linda Hanson was among many who spoke passionately for the inclusion of the word “growth”.

“The church is quite comfortable declining, but if we put words like growth in there it makes us accountable for what we are not doing. That’s why we as a Synod don’t want the word ‘growth’ up there because we might actually have to do it,” said Linda.

The full priority directions including points ‘b’, ‘c’, ‘d’ and ‘e’ were also passed by consensus.

The statement passed by consensus read as follows:

The Synod, as part of its journey of Together on the way, enriching community:

as the church grows, transitions and innovates.

For in-depth coverage of each day of the 32nd Synod visit journeyonline.com.au

Mission Control: a pioneering spirit in the church