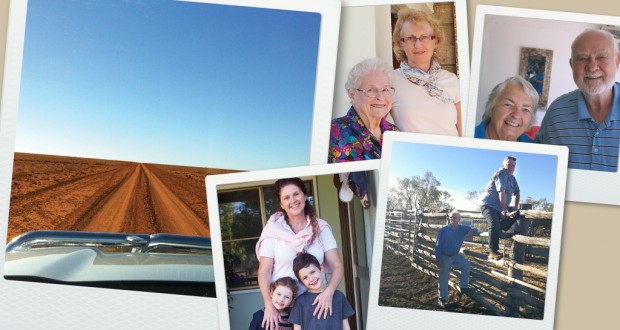 Everyone tells us that the country is a real picture in a good season. But as the moderator Rev David Baker, Central Queensland Presbytery minister Rev Brian Gilbert and their Uniting Communications sidekick meet with church members in Longreach, Barcaldine and Blackall, the talk is all about the iron grip of the drought. Dianne Jensen reports.

Over three days barrelling down long dusty roads through the iconic landscape of central west Queensland, there are many stories about what it means to be church in this remote and starkly beautiful place during the worst conditions in living memory.

Congregations in the bush have a lot in common with the faithful core who keep small churches alive across Queensland. But out here, the congregations of Central Queensland Presbytery are scattered across an area 1000 km west to east and 650 km north to south, and ordained ministers are rarer than hen’s teeth.

This is the third failed wet season for the Longreach district, following a string of years without decent rain. For as far as the eye can see (and that’s a long way out here), the Mitchell grasslands and Buffel grass are leached to the reddish-brown colour of the sandy soil.

When the going gets tough

Our first visit is to Marchmont, the 50 000 acre property of graziers Adrian and Julie Brown at Ilfracombe. Youngsters Xavier and Bronte are taught by their mother and a young governess via the Longreach School of Distance Education.

The homestead is an oasis of green fed by a diminishing dam. The bore water rising steaming hot from 800 metres below ground level waters stock, but is not suitable for the garden. Julie and the children take us on a tour of the empty shearing shed—like most people the Browns have sold their 8500 sheep, and the last of their beef cattle are on agistment.

Adrian’s parents Anne and Andy Brown are members of the Longreach Uniting Church, and the hosts of a barbecue that evening to meet the moderator. The 20 or so people are warm and friendly, and their stories of everyday life reflect a commitment to this community and a love of outback life.

Queensland moderator Rev David Baker’s message is simple, and it’s one that he delivers to church members everywhere we go on this whirlwind trip: you are not forgotten by your Uniting Church brothers and sisters living on the coast and in the cities. The church appreciates your witness. We know times are tough, and we care.

Jenny Coombes is the Uniting Church minister at Longreach, with a congregation of between 40 and 50 regular attenders, averaging around 27 on any given Sunday. Helping the church and the community survive the deepening crisis has become a focus for her ministry.

“We are doing a lot of work with drought relief, but getting the contact out on to the properties, that’s a challenge,” says Jenny. “It’s difficult in some cases to reach people because they are constantly out feeding cattle, or they’ve got the cattle on the road. You’ve got to build up the trust—in a lot of cases I am actually being the support person for someone who is supporting friends and family who are struggling.

“There used to be a very strong ministry, with about half a dozen stations where services would be held but as the older couples have retired into the town, there’s just not the people there,” she adds. “Each station used to be a community in its own right but now it’s right back to just the husband and wife, with kids going away to work elsewhere.”

Witnesses to the faith

The next day we catch up with Barcaldine Uniting Church members at Mandy Balderson’s café in the beautiful main street of Barcaldine. With no ordained minister, the congregation is sustained by a faithful group who work ecumenically to keep groups like the Ladies’ Fellowship alive and to provide a Christian presence at public events.

“When I came here ten years ago the average congregation would have been 20 to 25—now it’s 13. In that time there hasn’t been anybody come in that’s new—a few off and on, but there hasn’t been replenishment,” says Doug Lane, who is also actively involved in the local men’s shed.

The Barcaldine church used to receive a good income from catering at the cattle sales, adds Bev Church, but the volunteers can’t manage any more.

An hour or so down the road we meet members from Blackall Uniting Church, an active church community with 15 to 25 regular attenders, two keyboardists and song worship leaders, a drummer and a strong cohort of lay preachers. There is a regular Sunday service, a monthly Sunday Night Live service and a youth ministry led by Scott Walker.

“We get anywhere from between five to 15 kids at youth group—it’s really good, and we are just about to start up a Bible study for those who are really keen,” says Scott. “We do a small study at youth group but that’s more evangelistic, teaching them what Christianity is all about.”

His parents Phillip and Richelle Walker are stalwarts of the congregation. They own Westhill, a cattle property centred around a shady homestead about 30 km north of Blackall. In country terms, it’s just down the road from Alice Downs, the property where legendary shearer Jackie Howe made his mark.

Down at the Westhill yards, we watch cattle being rounded up by motorbike. Even though it’s dusty, the red-gold landscape dotted with trees is a stunning sight in the setting sun.

“It’s one of the better countries, except when it’s got no rain,” says Phil. “We used to have sheep, but the dogs [dingos] got rid of them, we have cattle now. You take years to build up to a certain stage of breeding, but at the moment we’re just selling. We closed the stud down.”

“This is a different sort of a drought to what we had from 2002 to 2007,” adds Richelle. “We’ve never run out of dam water at the house in the 34 years we’ve been there—we’ve been close—but this time we have and it’s only the third year.”

Retired couple Meryl and Graham Gibson have served the Blackall church for many years.

“We’ve got a thrift shop that we’ve run since 1958 and it has been a background support to the church and if anyone has any disaster in town we supply everything that they need,” says Meryl. “This is the worst year that we’ve ever had … we have $2 tags on just about everything in the shop and still people say that’s too much.”

Graham is on the combined churches team which provides breakfast to the local state school every Thursday. He and Meryl are both lay preachers and regularly travel to the tiny towns of Jericho and Alpha as well as sharing the preaching in Blackall.

“I am only getting say three people in Jericho and about six in Alpha, but if we don’t go that church will close,” says Graham. “Blackall church has seen that as our mission over the years. We’ve been maintaining it while we haven’t got a minster … but it’s a 400 km return trip.”

Who shall I send?

The pressures on rural congregations are familiar to Central Queensland Presbytery minister Brian Gilbert, whose remit covers the area from Prosperine to Winton, down to Blackall and across to Theodore and Miriam Vale and up the Capricorn coast.

There are no ordained ministers in Gregory (Capella, Clermont and Moranbah), Barcaldine, Blackall or Emerald, although Callide Valley (Biloela and Wowan) has the part-time (0.25) services of Pastor Donna Muston.

Brian says, “In some places there are lay people who are either trained as lay preachers or have done some sort of training at a lay course. One of the things that has had an impact has been Emmaus, where people take on leadership roles and learn to present in front of people—that’s been a good training ground.”

“One of the other things that has been significant has been the lay presidency of the sacraments. Back in the 90s this was a rarity, but now every congregation in the presbytery has people who are authorised to preside over the sacraments. Without that, places like Blackall, Barcaldine, Clermont, Capella, Dysart and Moranbah wouldn’t be able to have communion at all.”

Moderator Dave Baker believes that a full-time ordained person resourcing a growing ministry or congregation—the model the Uniting Church adopted at union—is still the ideal ministry model, even in the bush.

“We certainly have to be adaptable, and the churches that are surviving out here are doing so because of a willingness to do things differently. Rural Queenslanders have always had to be creative and inventive!” says Dave. “In the Uniting Church there is now a broader capacity to appoint people to positions of responsibility in faith communities—there are many models, and our understating of the ordering of the church must always
be of service to the mission of the church.”

Rev Jenny Coombes is one of the drivers behind the new Western Queensland Drought Appeal Committee set up by churches and community agencies to assist with the coordination and distribution of drought aid across the Longreach region.

“The impact of drought starts with the farmers, and moves to the people who supply things for the farmers, and then it moves to all the other businesses because there is no discretionary money. Work hours start reducing, so everything compounds,” says Jenny.

Donations of hay or food, however well meant, can chew up resources and under-cut locals, she says. “As soon as you send a product that can be purchased or produced here, you’re cutting out our businesses. We’ve got to have a community as a whole left when this drought finally breaks.”

The appeal committee will distribute funds to those affected by the drought, benefitting property owners and local business.

“I am constantly astounded at how positive the people are,” adds Jenny. “You know they are struggling but they also know it’s part of life on the land. They are not looking for charity—they need help just to keep going and they’ll work their way out of it.”