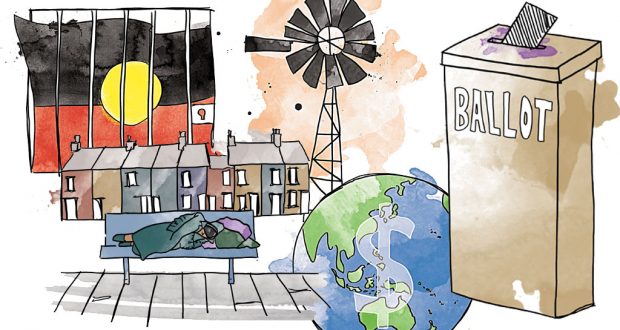 How carefully do we think before we exercise our democratic responsibilities by voting? Do we simply vote for the party we have always voted for? It’s hard to avoid simply following the agenda laid out by political parties and played out in the media. How can we hold politicians and political parties to account for those equally important policy decisions which might not make the headlines?

UnitingJustice has put together the 2016 federal election resource A Flourishing Society: your faith, your voice, your vote to assist Uniting Church members to consider nine issues that go to the heart of the church’s commitment to justice and peace, and help us consider how we might be actively engaged in the political process. Journey has chosen four hot-button topics from the resource in danger of slipping off the political agenda.

Aboriginal and Torres Strait Islander peoples do not commit more crime than other groups in society but they are treated unfairly in law. Public drunkenness laws, for example, impact much more on people who live outdoors than they do on people who get drunk in the privacy of their own homes.

“Respect for First Peoples is the hallmark of a great nation, and it’s now time for us to follow through on our unfinished business. For Christians, Christ’s love compels us to be truth tellers and ministers of reconciliation.”

The president of the Uniting Church in Australia Stuart McMillan, 22 January 2016.

Affordable housing for all

On any given night 105 000 people in Australia are homeless. The number of women and children experiencing homelessness is increasing, particularly amongst those attempting to leave situations of domestic violence. And when a person is in need of shelter, there is too often a shortage of safe, secure and affordable accommodation.

Rates of home ownership are in decline. Lower and middle income earners are most affected by increasing house prices with many being locked out of the property market as a result.

The Social Justice Forum of the Uniting Church NSW and ACT Synod has come up with a number of strategies aimed at improving housing affordability and reducing homelessness. This includes funding directed towards social housing, assistance to people in the private rental market and support and accommodation for people who are homeless.

“Research indicates that certain populations are more commonly trapped in the cycle of homelessness then others. For example, 64 per cent of adults who had been homeless in the last ten years cited a disability or a long-term health condition as the cause of their homelessness (ABS Australian Social Trends 2012: 2). One quarter of these individuals reported that they suffered from mental illness (ABS Australian Social Trends 2012: 2).”

Beyond the urban fringe

Rural and remote communities, cut off from major commercial and service hubs by distance and climate, are often confronted by a set of issues that can lead to a unique experience of disadvantage. This takes many forms across the spectrum of social, commercial and climatic impediments, and one factor can often work in concert with others to create even greater adversity.

Along with unpredictable and severe weather events precipitated by climate change, communities are struggling with a range of negative impacts from resource development such as “fly-in fly-out” work (FIFO). Lack of access to basic services and support can have devastating results for such communities under pressure, particularly in the area of mental health and wellbeing.

Frontier Services has identified the need for long-term policies to build resilience and enable communities to withstand the unpredictability of economic circumstances and changing climate, and to capitalise upon the opportunities. This includes infrastructure planning and the provision of social and economic support structures.

“The disadvantages impacting rural and regional communities are around the widening difference between city and rural and regional Australia in terms of delivery of services (health, education, etc.), employment opportunities and economic investment. This trinity of issues has seen an exodus from rural and regional Australia, broadly, of young people and families. Also we have seen in Victoria the growth of drug abuse and other dysfunctional behaviour due to the poverty trap that many young people find themselves in. It goes to the nature of who we are as an

Australian community; the values we want to believe about ourselves, the society we are wishing to create. The issue of equality of opportunity and access to services that urban Australia takes for granted.”

From poverty to fullness of life

The Uniting Church’s position as resolved at the 14th Assembly in 2015 is for Australia to revive previous budget commitments and to commit to a timetable to allocate 0.7 per cent of GNI to Australia’s overseas aid program. This would be in line with our international obligations and commitment under the Millennium Development Goals developed in 2000 and the subsequent Sustainable Development Goals (2015).

“This drastic reduction in aid will directly affect people and communities around the world who rely on the generosity of countries like Australia to support them as they move out of poverty and work to build healthy, safe and secure communities where all people are able to flourish. The reduction will gravely impact on people who require access to health, education and other vital life-saving services, while also undermining the stability and security of our region.”

UnitingWorld, A Flourishing Society: your faith, your voice, your vote 2016

To download the election toolkit A Flourishing Society: your faith, your voice, your vote visit unitingjustice.org.au/election2016.