Home > Features > The minister’s partner: life beyond the fish bowl 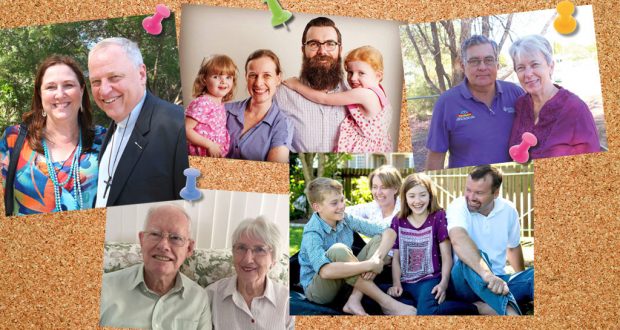 The minister’s partner: life beyond the fish bowl

It’s 2016, the working world has changed and “traditional” marriage roles no longer exist. Ashley Thompson explores what it means to be today’s face of the minister’s partner.

It was difficult to find people willing to speak to Journey about the challenges of being a minister’s spouse. Understandably, those who aren’t retired were not comfortable publicly voicing the strains ministry can have on their families while they currently serve in congregations.

This is why the Queensland Synod’s Partners in Ministry (PIM) organisation and yearly retreat is so important—because not many people can relate to the pressures and joy of serving the church in this unique way. It is a confidential safe space for attendees who can be comforted that “what happens at the PIM retreat, stays at the PIM retreat”.

“Unemployed employee” and “two for the price of one” are common phrases used to describe partners in ministry. Maria Buwa writes on the North American Ministerial Spouses Association blog that these idioms are a “tragedy” as merging a spouse’s labour together with that of their husband or wife “cripples their individuality”.

The church “demands a pastor’s spouse for service, and yet there is no budget for her,” says Maria, referring to her experience within the Seventh-day Adventist Church. A lack of recognition and an unrealistic expectation of involvement are the primary pain points of embittered spouses.

However, this is not everyone’s experience as we soon found out from those willing to share—the stories of our Uniting Church ministers’ partners ranged from fulfilling to challenging at worst.

Pam Kerr is the wife of retired Uniting Church minister, Rev Ian Kerr. She attends Forest Lake Uniting Church in Brisbane’s west, has qualifications in nursing and is a mother, grandmother and great-grandmother—but if you’re looking for the embittered spouse of a minister you’ve come to the wrong place.

“I loved it,” says Pam as she recalls Ian’s eight placements which ranged from northern Queensland to India and inner-city Brisbane.

“I loved travelling, I loved going to new parishes and meeting new people. It was always very interesting, I gained more than I gave I’m sure. We had hiccups and problems but I mean that’s life isn’t it? No, I loved my life. It was always a challenge.”

While Pam served the church in many areas, she does not tie this involvement to her status as the minister’s wife but rather that of an everyday church person.

“I see the minister’s wife as a lay person. She’s a member of the church like any other person who contributes and does what they can,” says Pam.

Of course there were expectations of the minister’s wife in parish ministry she adds, for example she was “automatically expected to be the president of the ladies fellowship”—but Ian supported her and always said, “It’s your life you do what you feel you should do”. And she did.

As a full-time mother and homemaker, Pam says she takes her “hat off to those women who can manage full-time work and have young children”.

She says partner roles have changed to reflect the wider community. “I would think the majority of couples younger than 60 would now have a working wife—whether they are in the ministry or not,” says Joan.

Like Pam she compares her involvement to that of a “committed lay member”, and speaks fondly of the flexibility parish ministry offered their family while their children were young.

As current organiser of the PIM retreat—held yearly at Alexandra Park Conference Centre on the Sunshine Coast—Joan is excited about the growing number of delegates as she is a “real believer that ministers’ partners have a lot in common with
each other.”

“Getting together, having fun, supporting one another and being called into a spiritual response together is meaningful.”

“I’m Peter Coombes from Longreach and I am not the minister’s wife,” was Peter’s cheeky quip to the 32nd Synod in May.

“When it became evident Jenny was going to be a candidate for ministry and become successful in it, I realised then that my role would be a support person for her. She had supported me when I travelled around with the army for 20 years,” says Peter.

“My perception of the program a few years ago was that it was very female-centric but I was refreshed by the different approach they’ve taken now. From a male viewpoint, I felt there was a much wider agenda overall.”

Peter is involved in the Longreach congregation but only because “that’s how I operate, I get involved in community”.

Having heard negative stories from previous partners in ministry, Lyndelle says she was anxious about encountering the old “24/7 style of ministry” often associated with living in an on-site manse.

“I’ve been told stories of how people would just not respect boundaries,” recalls Lyndelle. “Of partners feeling unsafe or being put in difficult situations when people would just show up at their home when the minister was out and come back night after night.

“The main thing that I’ve realised is the stories that partners in previous generations have told me are quite different to my own experience,” she says. “It’s changed, people accept now that the minister and their family does have a life apart from the church.”

Moving around every three to five years can be difficult and Lyndelle says she has learned that having “a group of friends not work related, or connected to your partner’s job” is key.

As a committed retreat participant, she is excited about the evolving program of the PIM retreat which has included inspiring speakers, massage therapists, a chaplain, barista coffee and walks on the beach.

“There’s this stereotype that we just do Bible study the whole weekend but really the most time we have is time for rest and connection.”

She is also a PIM committee member and happy to be in the company of “other people who know what it is to be married to a Uniting Church minister”.

“I don’t think people truly understand how much an ordination is a marriage—so you’re also married to the church, it’s theoretically the other woman,” says Amy.

“Prioritising family time is always difficult. There’s a lot of people in the church to keep happy and it’s not necessarily our job to keep them happy, but the burden of numbers makes it hard to balance family and work priorities.”

Amy has recently sought out a mentor to help her maintain her spiritual life.

Beyond the fish bowl

Marrying a minister has often been compared to living in a glass house, or as Amy puts it “a fish bowl”. Sacrifices are made and families are affected by those who accept the call to ministry both near and far.

However, much like the minister’s wife in the British TV show Rev. the role of your partner should and does not define you.

Minister’s partners are lawyers, doctors, mothers, husbands, teachers and at times, reverends themselves. Whatever the joys and challenges they face, the least we can do is validate their individuality.

Watch the first two seasons of Rev. on Stan or buy them on iTunes.