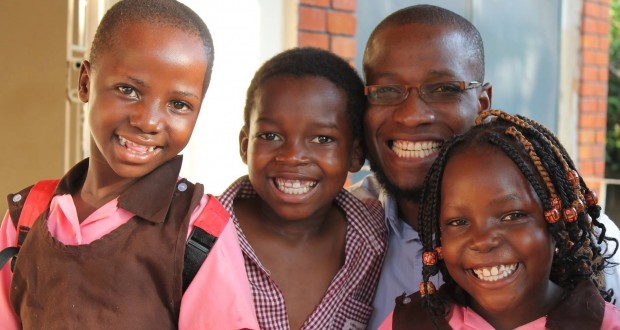 In Uganda, children are routinely kidnapped and their body parts cut off for ritual sacrifice. In pursuit of wealth, clients visit witchdoctors on a weekly basis delivering hearts, livers and blood to be consumed by spirits. 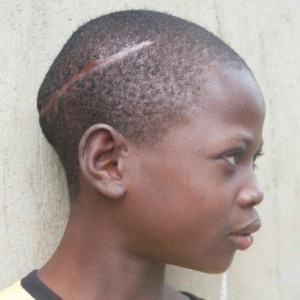 Allan is a survivor of child sacrifice
Photo: Peter Sewakiryanga

Pastor Peter Sewakiryanga is the Director of Kyampisi Childcare Ministries (KCM), one Ugandan aid organisation aiming to provide physical, emotional and spiritual healing to young victims of such atrocities. According to Mr Sewakiryanga, witchdoctors target children because they are seen as pure and the spirits are said to want pure blood and organs.

“In our culture’s past there has been some sort of sacrifice of animals to appease demon spirits and the gods of the witchdoctors—that has been happening for years—but the sacrifice of children, that is new—and growing.”

Bodies of dead children are widely believed to be buried at the foundations of Uganda’s capital, Kampala’s heightening skyline. Child sacrifice is a modern problem.

Mr Sewakiryanga has been a spokesperson on child sacrifice since the launch of KCM and Jubilee Campaign’s international prayer campaign, End Child Sacrifice back in 2009, attracting mainstream media attention from news outlets all over the world including the BBC, NBC and ABC.

He says that if a child is taken to be sacrificed, there is little hope of survival.

“Most of the time the children die while they are attacked and there are very few that actually survive. Others just disappear and you never see them again. It’s a strange phenomenon that has come to Uganda practised by witchdoctors and people who believe in witchcraft,” he says.

In 2011, the US State Department reported some 9000 children had gone missing in Uganda over four years, many of whom are feared to have been abducted for sacrifice.

“It’s hard to tell how many children have been killed—last year in 2012, we had 32 cases of children who were attacked and just one survived. The rest were killed. And we are a small charity so we really aren’t able to follow up all the cases all around the country,” says Mr Sewakiryanga.

Yet many find the reality of child sacrifice hard to believe.

Mr Sewakiryanga recalls the visit of a crew from the BBC back in 2010. The film-makers had originally set aside two months to see if anything would come of their visit, assuming the problem would not be so immediately visible.

The documentary they produced, Uganda Child Sacrifice would go on to be nominated for an Emmy award.

“There is a story in Uganda of a rich man, a very rich man, who claimed his riches and the whole community knew that he had killed his child to get wealthy,” says Mr Sewakiryanga.

As reported by the BBC, $600 is the average price tag for the ritual murder of a child, although Mr Sewakiryanga says witchdoctors vary the cost depending on the wealth of the individual and their perceived desperation.

Uganda’s Directorate of Social Protection has revealed that 67 per cent of Ugandans live on less than $2.40 a day. As a result, exploitation of the vulnerable is fierce, “but there is no evidence that child sacrifice brings wealth,” says Mr Sewakiryanga.

“It has also been used by witchdoctors to cover up what they have stolen from people. Once you get involved in the murder of a child, whether yours or somebody else’s, you are not going to follow up. You won’t go to police because it’s you who killed the child. So they will end the game like that.”

After a “divinely appointed” meeting with a Brisbane-based general practitioner on a flight between Uganda and Australia, Mr Sewakiryanga was connected with Australian surgeons who offered to perform life-saving surgery on the mutilated genitals of six-year old child sacrifice victim, George Mukisa.

Later, following coverage by the Sydney Morning Herald, another top surgeon offered to do the same for George’s best friend, Allan Ssembatya. Allan’s operation featured on Channel 10’s The Project early this year. Both boys are alive and thriving in KCM’s care.

“I think it’s God crowning his work, because no one knows me and no one knows a little village in the community of Kyampisi, bondaged in such poverty. But God called us to pray and it’s God who started this and God has his ways of connecting people,” says Mr Sewakiryanga.

He believes it is prayer that will heal his land as, “the only answer to spiritual issues is prayer”.

“When I came to Australia the response of people to pray for this was amazing. In fact that’s why I was able to see these miracles happen; children being saved and we as a team being safe from the hands of the witchdoctors and those that are seeking to retaliate for what we are doing,” he says.

The KCM team consists of 29 volunteers who care for 219 children, 80 of whom are directly affected by child sacrifice.

Where the Ugandan government has taken a “slow step in approaching this issue”, KCM is calling on the international community to stand with them and sign a petition to end child sacrifice which they hope to present to the Ugandan president by the end of next year.

“What we’re calling on the government is to look at the child protection laws, revise the 1957 colonial witchcraft act, which is still being used in Uganda, and bring the perpetrators to book because a lot of people are getting away with it.

“I’m here to stand and call upon the church to support our petition and push for international awareness because if a child in Uganda is dying, the whole world is affected,” says Mr Sewakiryanga.

Meanwhile, KCM is attempting to address the lack of access to medical help, one of the root causes of child sacrifice. Weema Clinic, KCM’s current project, is to be a physical and spiritual place of healing as well as a place to share the gospel.

“One of the reasons people go to witchdoctors is because they have a physical illness but nowhere to go for physical healing. They are desperate for healing and they will go there because there is no alternative,” says Mr Sewakiryanga.

“As a pastor I will sit in my office and see a lot of people with medical need and I will pray for them, yes, but common sense also tells me they need to see a doctor. Where there is no doctor they are pushed to resort to the lies of the witchdoctor.”

Asked why he would engage with such a wholly gruesome and emotionally taxing issue, Mr Sewakiryanga replies, “It’s a call. I don’t know why God chose me to do this but even if it’s for one child for me it will be worth it―it’s already worth it.”

For more information about KCM’s projects or to sign the petition visit kyampisi.org