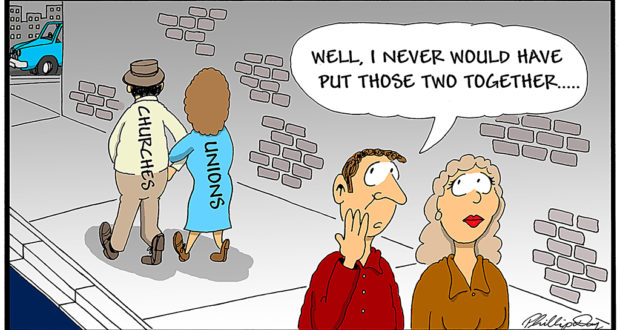 As I write this the village of Tolpuddle in Dorchester is having its annual celebration of the Tolpuddle Martyrs, a group of Methodist lay preachers who were transported in the mid-1800s to Australia for forming a union to protect their interests as agricultural workers (they were later pardoned).

On 30 August at the Brisbane City Hall, the Queensland Community Alliance (QCA) will be having a Founding Assembly. This is an alliance of churches, unions, groups from other faiths and community groups. The Premier and the Opposition Leader have been invited. There’s a deep connection between these two events.

For many in our church, unions and the churches are strange bedfellows. Well maybe they are now to some, but the denominations which formed the Uniting Church were birthed in a belief that the gospel was a public truth, a truth that influenced the way a society was shaped.

Queensland’s character is built on a strong sense of self-reliance. That’s a great attribute but that self-reliance has all too often been seen very individualistically, and only in a limited sense, communally. That perspective has costs.

The Logan Together project—a collaborative service delivery project in Logan City—wants to reduce the numbers of children who are developmentally delayed at age eight. Currently the percentages for Queensland are 30 per cent higher than those of other states. It goes back to the society that we have shaped by our beliefs, our actions, or our inaction. It goes back to the story all children in Queensland schools used to hear about the establishment of the colony: that it only had two shillings and three pence in the bank. It goes to why our rail gauge is only three feet six inches (we couldn’t afford longer timber sleepers).

It arises because we believe, as people made in the image of God, all of us are radically gifted, and all are able to contribute to our common life.