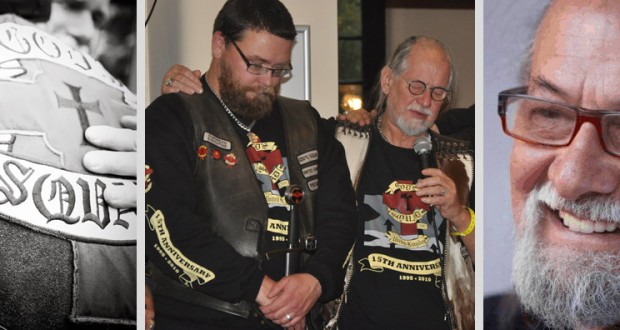 Rev Dr John Smith is a biker, and he’s proud of it. Known to many as “Smithy” or “the holy bullfrog”, the legendary God’s Squad figurehead may soon be mistaken for an outlaw under new Queensland legislation passed in a marathon early morning session in October.

The Queensland Government’s anti-bikie laws are now some of the toughest in the world, with 15 years added to the normal penalty for serious gang-related crime and a special bikie-only prison.

Dr Smith is convinced that the new laws clearly violate the United Nations charter of human rights, and that there is little evidence that such laws are effective in dealing with organised crime.

“I believe these laws are absolutely draconian and totally unjust,” he says. “The problem is that out of maybe 40 or 50 different clubs, what you’re getting is the attention given to three or four clubs that make it look like everybody that’s got a patch on his back is a criminal.”

After 42 years of ministry, what Dr Smith finds most distressing is that even men with “God’s Squad” on their back are being stopped and intimidated by Queensland police.

“The majority of guys in almost all outlaw clubs have no criminal records, they’re not involved in criminal activity and yet now by association they are marked,” says Dr Smith.

“One of the reasons Jesus was prosecuted and crucified was because of association―because he was a friend of public sinners and outcasts,” says Dr Smith. “Being a friend with someone doesn’t mean that I support everything in their lifestyle.”

According to Dr Smith there are few clubhouses in the world where God’s Squad members are not welcome. Everybody in the bike scene knows who they are, what they stand for and that they can come to them for help.

“You can’t judge a book by its cover … I mean that’s supposed to be a Christian value—God looks on the heart and man looks on the outward appearance,” says Dr Smith.

With a doctoral dissertation in cultural anthropology behind him, Dr Smith says there are many reasons men choose to join bikie clubs.

“Some people are in bike clubs, because—shock horror!—would you believe it, they actually like riding motorcycles. And they like having a sense of corporate identity with others. One size does not fit all.”

When asked how the new laws would affect God’s Squad Dr Smith replies, “Our ministry will never change. We believe that Jesus was a friend of outcasts and we intend following Jesus, whatever Campbell Newman suggests we should do.”

Look out for John Smith’s feature length, biographical documentary Smithy: Something in every hue, currently in production.