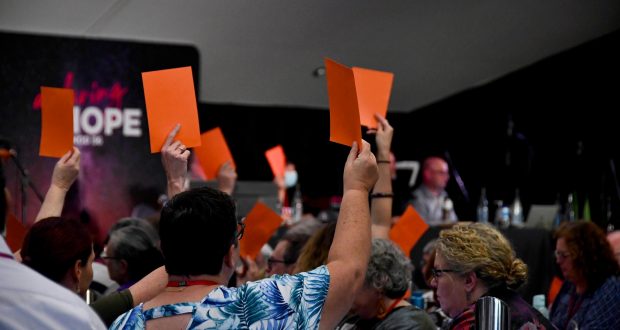 Scene from the 36th Synod- Supplied

The 36th Synod continued into Sunday with a focus on transforming communities. The first reports and proposals for the meeting were received, considered, and, in some cases, adopted in what has been a busy but engrossing day of work.

The morning began with worship and a bible study with Rev Richard Cassady and host Erin Mawhinney. Rev Cassady helped the Synod explore the daring hope of transforming community through the story of Jesus’ encounter with a Samaritan woman recorded in John 4. He challenged the Synod to explore and respond to the deep needs of our neighbours in the same way that Jesus responded in that story, outlining the value of being present, of creative engagement, and of knowing the season we’re in when engaging with community.

Moderator Rev Andrew Gunton’s written report was accepted, together with a visual tour through some of the experiences, opportunities and challenges that Andrew has encountered over the past 18 months. In a time of many well-documented trials for our communities, Rev Gunton expressed delight and hope and the strong threads of mission and ministry he has encountered throughout the state. He looks forward to the remainder of his term as Moderator and to future opportunities to share in the life of the church.

General Secretary Rev Heather den Houting provided a comprehensive update on the work of the office of the Synod, the Synod standing committee and associated governance groups. Rev den Houting highlighted the signs of hope that are visible across our church, suggesting that we are together catching a vision for what God might be drawing our church toward. New initiatives of the Synod’s office include a Ministry Matters initiative, expansion of the congregational bookkeeping project, the important work of the new Uniting Education Early Learning group, work connected with the Assembly Safe Church and national redress work and foreshadowed a series of significant proposals related to governance that will be brought to the 37th Synod.

Finance, Investment and Property Board Report

Chair of the Synod’s Finance, Investment and Property (FIP) Board, Mr Geoff Batkin, outlined the financial position of the Synod and the work of the FIP Board over the last term. Mr Batkin pointed forward to the next five years of work for the board, outlining exciting plans for new approaches to mission resourcing, financial management, and relationships between the board and many entities of the church.

Growing student numbers in Property Trust Schools such as The Lakes College and SCOTS PGC and tertiary residential colleges such as Raymont Lodge and Kings College were highlights of the Schools and Residential Colleges Commission report. The Commission also outlined its work toward strategy related to the Synod’s Plenty initiative and its schools and colleges.

Board for Christian Formation Report

The Board for Christian Formation has focused on a maturing approach to its charter, stewardship of Trinity College Queensland, and working more closely with the increasingly capable Synod office. Outgoing Chair Rev Peter Armstrong outlined future projects, including a new non-higher education pathway to ordination and the desire to add new members to the board. Trinity College Queensland outlined exciting developments at the college, both in teaching and faculty, and the College’s facilities. Principle Mr Paul Jones highlighted the availability of his faculty to support and resource the whole church, naming an emerging project with The Lakes College as an exciting example.

Mr Craig Barke (CEO), Mr Nigel Alexander (Board Chair) and Rev Bruce Moore (Director of Mission) explored the extraordinary work of UnitingCare Queensland as the Synod’s mission agency. UnitingCare supports over 400 000 people every year across Qld and into the Northern Territory through its services in aged care, family, disability, crisis care, indigenous services and more. Mr Barke paid particular tribute to congregations whose foresight and vision led to the establishment of so many of UnitingCare’s services and the organisation’s staff and volunteers. At the same time, Mr Alexander outlined facility updates, growing connections with Uniting Church congregations and the commitment to exceptional in-person care across the organisation. All three recognised the extraordinary challenges of the last few years that UnitingCare has helped Queenslanders face and withstood in its operations.

The incredible work of Wesley Mission Queensland was highlighted by Ms Jude Emmer (CEO), Mr Paul Newman (Chair) and Rev Dr Peter Hobson. The values and identity of Wesley Mission Qld as a work of Albert St Uniting Church are at the heart of the organisation. Ms Emmer highlighted the work of staff and volunteers and their relationships with the people served across the organisation. At the same time, Mr Newman noted significant growth in service areas such as mental health and critical investment planned for social and affordable housing in the years ahead. The difficulties of supporting vulnerable populations in the face of the COVID-19 pandemic have shaped the work and life of the organisation, including driving innovations. Rev Hobson remembered the forebears of Albert St Uniting Church and outlined emerging work in public theology, discipleship, and new forms of ministry for this historic church.

The Synod had its first opportunity to consider and, in some cases, resolve general business proposals.

General proposal three proposes a new policy framework for the operation of the Synod’s Mission Development Fund, including funds held after property sales by entities within the church. After three years of work and consultation, the Synod adopted the new policy.

General proposal four was adopted, drawing to a close the work of the Synod Interfaith Relations Committee and the Synod Ecumenical Relations Committee. The decision suggests new ways forward for this vital work and thanks to members of the two committees for their work.

General proposal seven, adopted by the Synod today, established a mechanism for staggered appointments to the Board for Christian Formation by both the Synod itself and the Synod Standing Committee to assist with continuity of board membership.

General proposal two relating to establishing a new mission-focused sub-committee of the Synod Standing Committee was considered both in plenary sessions and small groups. The Synod will return to this proposal for deliberation on Monday.

Similarly, general proposal six, addressing a review of by-laws of the church requiring Uniting Church membership for all members of governing bodies, was also considered both in plenary and in small groups. The Synod will return to this matter later in the meeting.

The Synod conducted a series of ballots for various governance groups, electing members and officers as follows:

Mr Geoff Batkin was returned as Chair of the Property Trust, along with Mr Peter Cranna as secretary. Members of the Trust are Mr Reg Gulley, Mr Geoff Erickson and Mr Hayden Gaffel

Ms Jillian Ross was elected as a new member of the Board for Christian Formation.

A service of worship acknowledging those who have served God through the Uniting Church and marking their retirement, passing, significant milestones and ordination will be publicly streamed Sunday evening. The service usually takes place in person but was offered in this fashion out of a sense of care for vulnerable people and family members during this pandemic period. The service will remain available on the Synod website for a period of time.

The Synod continues Monday, with a focus theme of fit for purpose.