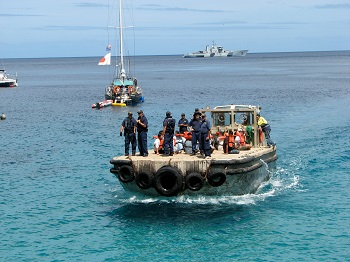 The Uniting Church in Australia has expressed concern about plans to send asylum seekers to Papua New Guinea (PNG) for assessment and resettlement. Dianne Jensen reports.

The policy was announced by Prime Minister Kevin Rudd and PNG Prime Minister Peter O'Neill in Brisbane on 19 July. The agreement, which will be in place for at least the next 12 months, means that maritime arrivals will be sent to Manus Island or elsewhere in PNG for assessment; those found to be refugees will be resettled in PNG while the remainder will be sent back to their own country or to a third nation.

President of the Uniting Church Assembly Rev Dr Andrew Dutney described the policy as an "abdication of responsibility" by the Australian government.

"We now see firmly entrenched in our political system an approach that seeks to circumvent the spirit of hospitality and compassion codified in international treaties and obligations," said Dr Dutney.

Dr Dutney pointed to recent United Nations High Commission for Refugees reports criticising the processing centre on Manus Island. After a second visit in June, commissioners said that the facility still fails to meet the terms of the memorandum of understanding between Australia and Papua New Guinea agreed to when the facility was established.

Currently, about 145 people are housed on the island. The last children were removed in early July following ongoing concerns about the suitability of the accommodation and services. The new agreement includes a significant expansion of the centre to house 3000 people, up from the original capacity of 600.

Dr Dutney described the choice of PNG as "burden-shifting at its most base".

"We also know that the ongoing human rights violations and extreme poverty in Papua New Guinea mean it is not a safe option for permanent resettlement of refugees," he said.

National Director of UnitingJustice Rev Elenie Poulos, who is also chairperson of the Australian Churches Refugee Taskforce, rebutted the notion there was such a thing as a queue for asylum seekers.

Rev Kaye Ronalds, Queensland Synod Moderator said, "If we are not prepared to offer a home to asylum seekers in our own country, why would we expect that of our near neighbours who have limited capacity? I find myself asking, who is my neighbour?"

Figures from the Department of Immigration show 15 610 people on 220 boats have arrived so far this year.

The Gillard government reintroduced offshore processing in Nauru and Manus Island in 2012. The detention centre at Nauru, which houses 540 asylum seekers, was the scene of a riot on 19 July which caused $60 million worth of damage and destroyed 80 per cent of the buildings.

25 August is Refugee and Migrant Sunday, a celebration of the dignity of people who are refugees and migrants and the contribution they have made to life in Australia.