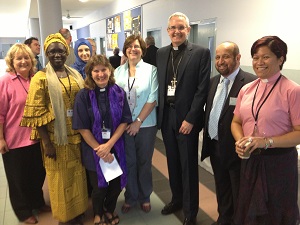 A joint conference between members of the Australian Islamic Cultural Centre (AICC) and the Uniting Church in Australia Assembly was hosted by Al-Faisal College in Auburn on the 17 April 2013.

The Assembly's Working Group on Relations with Other Faiths brought together fifteen ministers from around Australia who joined Muslim leaders, scholars and teachers to discuss the theme 'to Love God and to Love Neighbour'.

Rev Professor Andrew Dutney, President of the Uniting Church Assembly, said that the day was a chance for the Islamic and Christian communities to learn from each other and to discuss faith more broadly.

Participants talked about their experiences within their faiths including the challenges they face, training for religious life and perceptions of their customs and beliefs.

Both Islamic and Christian scripture were emphasised, with prayer in both Arabic and English.

The open letter 'A Common Word Between Us and You' was presented by Dr Zachariah Matthews and Rev Dr Matthew Wilson and was the focal point for the afternoon session.

The document, published in 2007, is a call from Muslim religious leaders to the Pope, Christian leaders and Churches and quotes verses from both the Quran and the Bible affirming the love of God and the love of neighbour which are central themes to both faiths.

Both communities discussed ways in which they could move the dialogue forward, including the reading of 'A Common Word' by UCA ministers and Mosque leaders and holding future informal meetings between the Uniting Church and the AICC.

"We are building stronger relationships between Christians and Muslims so that in times of crisis, our two faiths can stand beside each other.

"We are one community."

Photo : President Andrew Dutney with members of the AICC. Photo courtesy of the Uniting Church in Australia Assembly