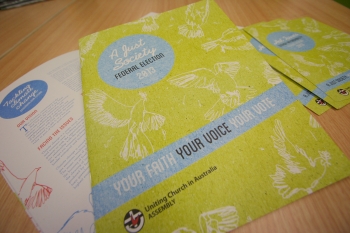 Working for a just society is an integral part of the Uniting Church. In the lead-up to the federal election UnitingJustice calls Christians to vote ethically.

“As Christians, we have a responsibility to think carefully and cast our vote with the needs of the most vulnerable in mind,” says UnitingJustice National Director, Rev Elenie Poulos.

As the justice unit of the National Assembly, UnitingJustice Australia pursues national matters of social and economic justice, human rights, peace and the environment.

As part of this call, UnitingJustice launched a Federal election resource, A Just Society: Your Faith, Your Voice, Your Vote, in Canberra last month. Each Queensland congregation received a copy of this resource in their congregation pack at the 30th Queensland Synod.

Ms Poulos says the resource is an expression of Christian faith and hope, focusing on the good of all people and the planet.

“This resource is a call for all Christians to raise their voice and share in the Church’s vision for a just society.”

A Just Society enables people to think through the values underpinning political policies in the upcoming election. The materials identify important issues facing Australia, including issues the Uniting Church has spoken publicly about, and encourages people to listen to politicians with discernment.

“This is a time when many are disappointed in the lack of vision and passion in the current political climate,” says Ms Poulos.

“As Christian voters we can make an impact before, during and after the election—sharing and working for a vision for the future of our country that arises out of a deep and abiding Christian hope.

“It is my hope that we see a vision for a just society not only for this election, but for the years to come.”

As the justice policy and advocacy unit of the Assembly, UnitingJustice supports the Uniting Church in its response to contemporary social and political concerns including lobbying government, producing resources for church members and collaborating through ecumenical alliances, like the newly appointed Australian Churches Refugee Taskforce.

The 2013 election resources are available on the UnitingJustice website.