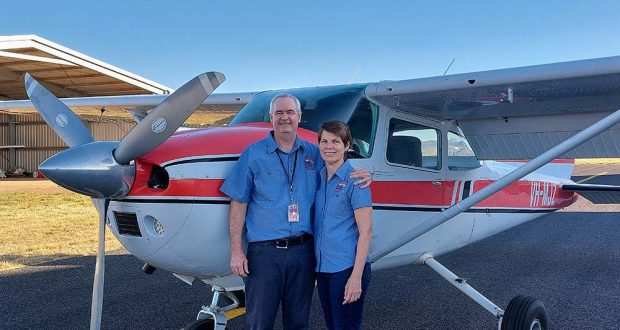 “God moves in a mysterious way. His wonders to perform; He plants His footsteps in the sea. And rides upon the storm.” William Cowper 1774

This was no ordinary job interview, and this was just no ordinary job. Imagine being asked if you could take your job into the air, learn to fly a light aircraft and travel to remote communities to serve and support. Would that thought terrify you or enthral you? Pastor Michael Chapman was to have a job interview that would change the course of his life and open opportunities that he never thought existed.

This is Pastor Michael and Di’s story;

“I was a Pastor of a small church in Mareeba, Far North Qld, when my boss, the Presbytery Minister, Rev Garry Hardingham, approached me to take on the Remote Bush Chaplain role due to the previous Chaplain moving on. To be honest, my first response was, ‘No, I really don’t want to do that.’ I had no desire to learn how to fly, and I didn’t really want to move to Cloncurry. I was in a good placement in Mareeba, which was supposed to continue for a few more years. But he asked me to seriously consider it and pray about it, so I agreed at least to do that.

“After praying about it, I came up with a really good list of reasons why I shouldn’t take on the role, so I went back to the Presbyter Minister armed with my list. But he went through each reason one by one and dismantled them! ‘This one isn’t relevant because it’s not part of the job’, ‘This one we can easily get around by doing this other thing instead.’ ‘This one won’t affect you because you will be covered by this other situation’. Etc. I was a bit devastated. I had no reasons left, but I still didn’t want to do it. But he said he would take me and my wife for a trip to Cloncurry to see the town, meet some people, meet the church I would be involved in, go for a fly, etc. Due diligence. How could I refuse? I thought, ‘Yes, I’ll go for a look, but I don’t want to do that job.’ However, God did a miracle in my and my wife’s hearts. Once we went there, prayerfully putting it to God and saw the potential of what could be done and how we might fit in, we could see that God really was in this change. I still did not warm to the idea of learning how to fly, but if it was part of the job, I would do it. I would endure it.

“We arrived late February this year, and it was like moving into a fan-forced oven. Very hot. Very dry. My beautiful Maton Guitar was rapidly dried from the heat and literally cracked up! My boss said that my first priority was to learn how to fly, which I have been diligently working on. One of the very nice surprises is that the more I learn to fly, the more I have moved from enduring to enjoying flying! I now look forward to my lessons and expect to have my pilot’s licence within a couple of months. We are getting to know people in the town and surroundings, and we have become involved in the local church, where I preach at least once per month, but I also have been asked to preach in other towns in the region.

“Next month (August), we will be going to a series of ‘School of the Air’ events where we will meet many remote station owners and their families. This will be an essential connection as much of what Di and I will be doing will be flying into remote stations onto their bush airstrips to offer support and any assistance we can.

“Because I am just beginning, my stories are emerging, but from past Remote Bush Chaplain’s stories, a huge range of opportunities will arise. Conducting funerals, weddings and baptisms in remote places; responding to needs for support during difficult times of grief, hardship, or natural disaster; being a caring listening ear for very isolated collections of people on stations and in small towns; responding to random requests, for example, someone is stuck, broken down in an isolated area and needs to be extracted, so I fly to the nearest airstrip to get them.

“Someone needs supplies and can’t get them for some reason, so I can fly them in. Someone is injured in a place where the RFDS plane can’t land, so I fly in with my smaller plane and take them to where the RFDS can take them. There are many events to attend to be available with a listening ear and willing hands. Of course, where people are open and interested, we offer a conversation about their spiritual needs too. I will be conducting services in remote towns and stations as opportunities arise. The job will grow and evolve as we throw ourselves in and ‘see what God brings’. Most people know of ‘the flying Pardre’ and appreciate their presence.

“I hope that gives a window into the world we have begun to enter.” 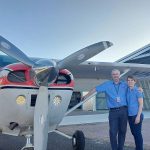