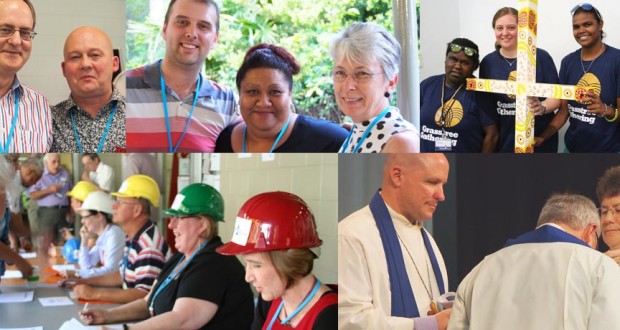 The 31st Queensland Synod meeting (10–15 October) could be characterised by an energy signifying that the church is on the cusp of something different.

Members from across the Queensland Synod gathered together for the 31st Synod in Session as they discussed issues important to the Uniting Church in Queensland, ranging from statistics of church decline and hardship to inspiring stories of the church at work in the community.

The Synod in Session is a gathering of around 350 Queensland Uniting Church members, ministers and ex-officios from key councils of the church that meets for five days every 18 months at Alexandra Park Conference Centre, Sunshine Coast, to discern the future direction of the church.

During his induction service at Unity College, Caloundra on 10 October, new Moderator Rev David Baker spoke on Numbers 9:15–23 to impress upon those present the importance of being fruitful, despite sometimes difficult circumstances. He reminded people that the Synod theme, A charge to keep, was about “ensuring that we keep our eye on the ball”.

“There is a predicament—speaking generally—in which we have been caught up, that of institutional survival. Our survival is not our concern. That is our Lord’s concern … Our concern is being fruitful as church.”

Synod members heard reports of the work of the Synod, presbyteries, agencies and the Assembly.

Gary Doyle was called as the next General Secretary of the Queensland Synod. Gary is currently principal of The John Flynn College, a university college in Townsville.  A member of Aitkenvale Uniting Church, Gary will begin as General Secretary in early 2015.

In his report, current General Secretary Rev John Cox said a recent review of the Synod’s Together on the way journey had brought up new challenges and opportunities.

“The financial challenges that birthed the Together on the way journey were not the cause of our crisis, but a symptom,” John said as he called on the Synod to define what it is called to do and release resources to enable that mission.

John commended the proactive, thorough and timely engagement with two major government activities which have taken up considerable Synod office resources over the past 18 months: the Royal Commission into Institutional Child Sexual Abuse (and accompanying child-safe policy implementation) and the Australian Charities and Not-for-profits Commission.

Robert Packer and Andrew McBryde presented a summary of the detailed report given to Synod Standing Committee. Robert highlighted the significant work over the last 18 months, including the support provided to Shalom Christian College and the administration of Congress Community Development and Education Unit Limited.

According to the FIP Board the Synod is in a much better financial position than at last Synod, but still has a way to go. Robert said part of the reason for the optimistic financial position is from one-off events, particularly a large reduction in insurance reserve requirements.

Andrew McBryde said the Synod’s financial crisis is not over.

“We’ve managed to trade through what would have killed many organisations,” he said. “This was as much a spiritual crisis as it was a financial one and many of the behaviours that led to the crisis have not changed significantly.”

UnitingCare Queensland’s report assured Synod members that the organisation is on track to meet the challenges of an era of unprecedented change.

CEO Anne Cross said the organisation must continue to adapt in order to respond to the pace and extent of reforms to health, aged and community care, disability, child protection and community services.

“There is no room for complacency and the sense of urgency is high,” said Anne as she presented the UnitingCare Queensland report.

Anne described the current aged care reforms as “the most extensive that have ever occurred in aged care”. She also said that the National Disability Insurance Scheme will change the relationship between government, people with disabilities and their families and community service providers. Reforms to government funding and contracting, and an increasing cost efficiency, were also driving change in the sector.

The Open Space work on the last two days of the meeting, facilitated by Norman and Mary Millar lecturer Brendan McKeague, was initiated by a question: “Our church is on life support, what’s our call now?”

After a day of passionate discussions on over 100 topics directed by Synod members, a number of key themes were flagged as priorities for the future of the Uniting Church in Queensland. Synod members committed to the responsibility of driving the work to come. Key themes were: making worship open and welcoming to people who are not part of a church; church planting; children, youth, families and young adults; ministry formation; preparing ministry agents for retirement; the local church as agents of transformation in the local community; resource sharing across urban and rural locations; faith sharing as a priority; and prayer, worship style and being prophetic voice.

A number of general proposals were passed by consensus during the 31st Synod in Session, many focusing on the church’s call to love our neighbour as ourselves.

The Synod resolved to engage more with people living with mental health issues; join UnitingCare Queensland as official partners of the Recognise campaign for constitutional recognition for Aboriginal and Torres Strait Islander peoples; bolster the interfaith work undertaken in the Queensland Synod; encourage congregations to participate in Freedom Sunday, held annually on the Sunday closest to Anti-Slavery Day (18 October) and to establish a social responsibility reference group to assist in determining the social responsibility priorities for the Synod.

As we look to the future of the Uniting Church in Queensland, General Secretary John Cox said the Synod is in a phase of significant transition. “I want to assure the Synod that this change has been managed really well,” he said. “We want to recognise that transition holds both promise … and challenge.”

Podcasts of the Synod Bible studies and the Norman and Mary Millar lecture are available at ucaqld.com.au 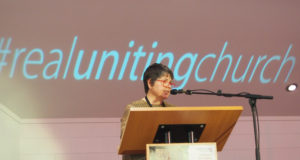