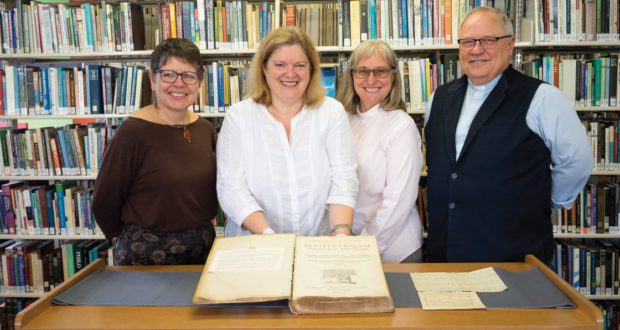 A venerable tome from the historic St Stephen’s Uniting Church in Toowoomba is now available to another generation at Trinity College Library in Brisbane.

The 1654 copy of John Calvin’s Institutes, brought by Rev William Nelson to the former Presbyterian church when it opened in 1864, was placed on loan with the library on 29 March.

“Rev William Nelson came from Edinburgh, Scotland to begin the first Presbyterian church in Toowoomba and he was given a copy of the Institutes to bring with him so that he might train up ministers here in the colony,” says Rev Linda Hamill from St Stephen’s.

The book was stored in an archival box in the vault at St Stephen’s until recently when the church approached the library.

“One reason was preservation of the book,” says Linda. “It’s better to be in the library which has the proper air conditioning and humidity-controlled storage. The second reason is that it was agreed that the book be given to a theological library so that it can still serve its original purpose of being a teaching tool. In the library it will be catalogued and people can go directly to the original Latin.”

French Reformation theologian John Calvin wrote the first edition in 1536 to explain the basics of Christianity to the French King Francis 1, who was resisting the Reformation movements.

Rev Peter Lockhart says that Calvin reworked the text four times and it became a guiding systematic explanation of Christianity from a Reformed perspective.

“The focus of much of Calvin’s work was explaining the scriptures. This was vitally important at the time. In moving away from the historical teaching of the Catholic Church (known as the Magisterium) the Protestants and Reformers needed to ground their decision to be separate in some other authority and this was primarily the Bible.”

The Uniting Church has a strong connection to Calvin and his Institutes due to his influence on the Scottish Reformer John Knox, who was pivotal in the development of the Presbyterian Church and the emergence of the Congregational Church.

“The early Latin copy of the Institutes is a precious link to our heritage, and the historical value of the book is inestimable,” says Peter. 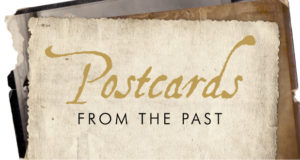