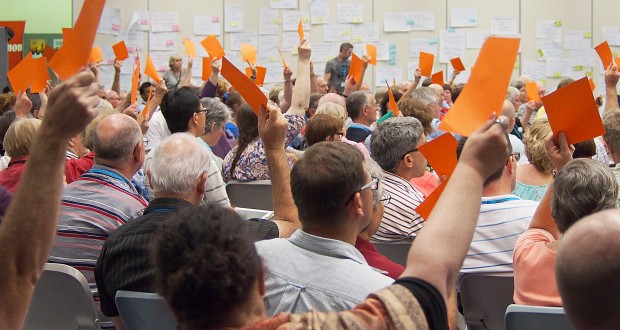 Orange cards indicate warmth or approval to an idea.

Synod resolutions show concern for others

A number of general proposals were passed by consensus during the 31st Synod in Session, many focussing on the church’s call to love our neighbour as ourselves.

Synod members agreed and called on the Government to “work with urgency towards holding a referendum” and committed to work with UnitingJustice to ensure this issue is considered by the 14th Assembly next year and encouraged congregations to listen to Indigenous peoples as they engage the question of constitutional recognition.

Anne acknowledged controversy around the lack of a push for a treaty between First and Second Peoples, but said that under advice from constitutional lawyers, a preamble recognising Indigenous occupation of Australia before European settlement would not preclude the possibility of a treaty in the future.

Dennis said it was time for Indigenous people to be formally recognised in the Australian constitution, saying it would be beneficial for Aboriginal and Torres Strait Islander people and Australia as a whole.

The Synod also resolved to engage more with people living with mental health issues. In a proposal brought by immediate past Moderator Rev Kaye Ronalds and Rev Craig Batty, the Synod resolved to affirm the ongoing provision of mental health services by UnitingCare Queensland agencies and Wesley Mission Brisbane and requested all congregations to actively participate in the National Day of Prayer for Mental Health held during Mental Health Week in October each year.

Craig reminded members that one in four people will suffer from a mental health issue throughout their life.

Relations with other faiths

A proposal was brought by Rev Heather Griffin and Rev Ann Hewson, arising from the Moderator’s report, to bolster the interfaith work already underway in the Queensland Synod.

“With the rise of ISIL, the climate of fear of Muslims has risen to new levels,” said Heather. “The fear that leads to violence, injustice and misunderstanding is present in all our congregations and agencies, and the love of Christ needs to overcome this fear.”

The Synod also asked presbyteries to encourage congregations to explore being Christian in a multi-religious world and seek opportunities to promote understanding and positive relationships among people of all faiths in their communities.

The 31st Synod resolved to invite congregations to participate in Freedom Sunday, held annually on the Sunday closest to World Anti-Slavery Day (18 October), through awareness and fundraising, worship, prayer and action—all poised against slavery and exploitation.

“The Uniting Communications research officers have been very helpful to me during my time as moderator, but there are other people who are also passionate about issues of social justice who might be able to broaden that conversation,” she said.

The Synod resolved to establish a reference group, with the terms of reference of membership being determined by the Synod Standing Committee. This group would work with the Moderator and Uniting Communications research officer position.