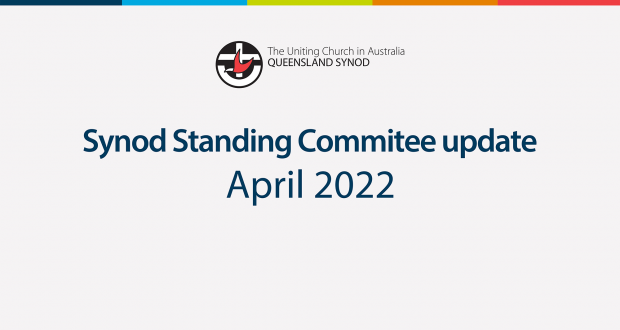 Below is a summary of the Synod Standing Committee (SSC) meeting—held on Thursday, April 7, 2022 – to inform the wider Queensland Synod community of the discussions, deliberations and decisions arising from that meeting.

Due to the lifting of COVID restrictions, the Moderator attended his first face to face Synod office staff meeting.

Some planned Presbytery meetings had to be postponed due to the recent flood and weather events. The Moderator was greatly encouraged by the energy of Presbyteries facing a clean-up and community rebuild.

The Synod Standing Committee approved the re-branding of the Schools and Residential Colleges Commission (SRCC) to Uniting Education Schools and Colleges (UESC).

The committee noted the South Moreton Presbytery’s decision regarding the dissolution of the Sunnybank Uniting Church congregation.

The Synod office’s “We are better together” booklet was launched and is being distributed and workshopped with Synod staff, especially with Uniting Early Learning staff. The initiative aims to build rapport and culture within the Office of the Synod.

Congratulations to those who received extensions or nominations to positions within several Synod boards, commissions, and committees. The ongoing service of these members to the mission of the church is gratefully acknowledged.

The SSC approved the following appointments: