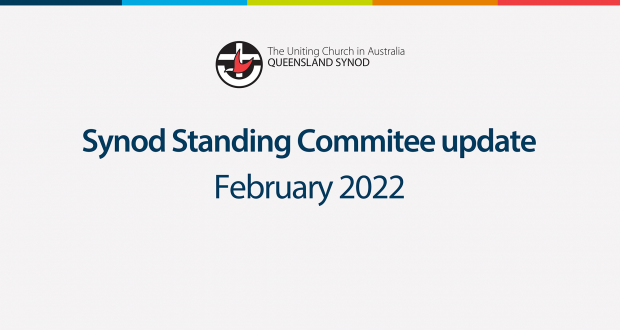 Below is a summary of the Synod Standing Committee (SSC) meeting—held on Thursday, February 3, 2022 – to inform the wider Queensland Synod community of the discussions, deliberations and decisions arising from that meeting.

Effective 1 February, all ministry agents, Synod Office staff and enterprise staff are required to be double vaccinated. Eligible staff were invited to return to the Synod on February 7. 85 Synod staff and 213 Ministry agents/supply ministers are policy compliant.

The SSC has previously stated that it recognises the role of the Queensland Synod under the Work Health and Safety Act 2011 (Queensland) and the D1.1 Synod Wide WHS Framework requirements to continue providing a healthy and safe working environment so far as reasonably practicable for all workers regardless of placement or position.

The resignations of key senior leadership fostered a review of the Synod office structure. Grant Weaver was appointed Executive Director of People, Culture and Learning. The General Counsel and team will now report directly to the General Secretary, and the CIO role has been relegated, and a Head of Technology has instead been appointed.

The Moderator updated the SSC on activities throughout December and January, which included congregational visits to Rockhampton and Townsville and community engagements. The Anti-Discrimination Act Review was an opportunity to meet with denominational church leaders to discuss a combined response; Professor Nick Aroney from the University of Queensland was asked to help with a draft. The final submission is due on March 1.

The General Secretary provided the SSC with a Culture Blueprint for the Synod office and activities relative to high-level operating concepts and values. Areas of concentrated activity identified through strategic priorities for the 2022 calendar year were also shared.

Congratulations to those who received extensions or nominations to positions within several Synod boards, commissions, and committees. The ongoing service of these members to the mission of the church is gratefully acknowledged.

The SSC approved the following appointments.