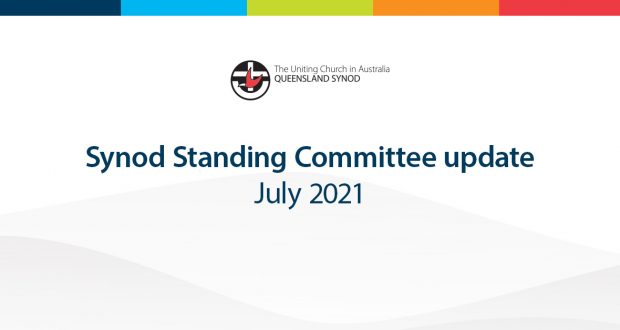 Here’s a brief summary of the Synod Standing Committee (SSC) meeting—held on Thursday 1 July 2021—to inform the wider Queensland Synod community of the discussions, deliberations and decisions arising from that meeting. This meeting was an online meeting.

Hearing from our boards and commissions

Schools and Residential Colleges Commission Chair Noela Lister and Commission Member Stuart Christ presented an update to the SSC. The members of the SSC give thanks for the tremendous work of the commission, and the role that our schools and residential colleges play within the life of our church.

Synod Office Mission Engagement Manager Steve Drinkall presented to SSC on Plenty, including an update on membership of the working groups, the working group emerging strategies and challenges of the broader project.

The SSC also received an update from Remuneration and Nomination Committee Chair Natalie Smith and Nigel Alexander, Craig Barke and Rev Peter Armstrong—representing UnitingCare Queensland—who provided a quarterly update from this agency. Both updates were well received and members of the SSC prayed for the members of each committee and staff across UnitingCare Queensland.

The Moderator updated the SSC on activities throughout June, including a visit to congregations in Chinchilla, St George and Roma. The Moderator has been actively involved in government lobbying around Voluntary Assisted Dying, meeting with the Attorney-General to discuss the church’s concerns specifically regarding institutional conscientious objection. The church has made a submission to the next stage of the inquiry and the Moderator will appear as a witness along with other faith-based groups as part of hearings.

The Moderator also spoke about the Presbytery Chairs Gathering held in June which was a valuable opportunity to share common themes and community building.

The Synod Standing Committee will next meet on 5 August 2021.