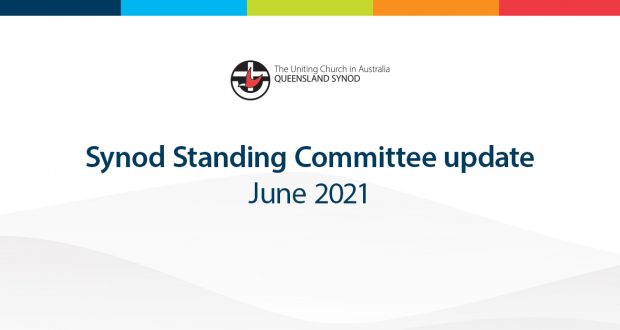 Here’s a brief summary of the Synod Standing Committee (SSC) meeting—held on Thursday 3 June 2021—to inform the wider Queensland Synod community of the discussions, deliberations and decisions arising from that meeting. This meeting was a hybrid meeting with some members attending in person and others attending virtually.

Many will be aware of the review into chaplaincy which has been undertaken in recent months. At the June SSC meeting, the revised Synod Chaplaincy Commission charter was approved. Detailed communications regarding the broader outcomes of the review will be released in the coming weeks.

Moderator Rev Andrew Gunton provided an update on visits to congregations and presbyteries in May, including attending the Carpentaria Presbytery meeting. The Moderator and General Secretary also attended the Uniting Aboriginal and Islander Christian Congress (UAICC) gathering in Cairns. The report from the gathering is a very welcome first step for reengaging the UAICC in Queensland.

The Moderator also reported on advocacy efforts around Voluntary Assisted Dying with significant media interest around the church’s position, including an interview for ABC news and on 96.5FM.

The SSC received a presentation from an external party regarding Synod Office culture. This report will be discussed at an upcoming meeting of the Synod Office Executive Leadership Team at which time outcomes and initiatives will be communicated.

The SSC also received an update on the exciting Uniting Education-Early Learning initiative.

The Synod Standing Committee will next meet on 1 July 2021.