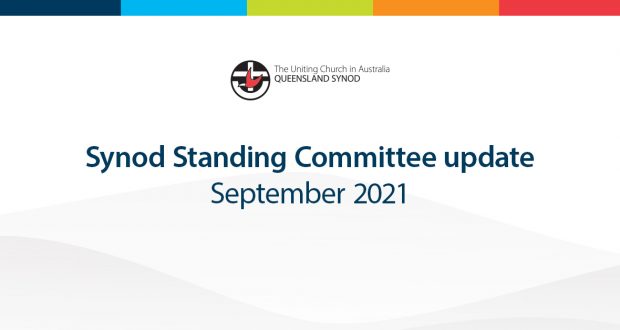 Here’s a brief summary of the Synod Standing Committee (SSC) meeting—held on Thursday 2 September 2021—to inform the wider Queensland Synod community of the discussions, deliberations and decisions arising from that meeting. This meeting was held online.

The SSC was pleased to approve that the Partners in Ministry become an official activity of the Queensland Synod. This group is incredibly important in the life of our church and the SSC gives thanks and praise to not only the members of the group, but to all partners in ministry.

The Moderator provided SSC an update on activities throughout August including the rebranded Moderator’s Social Action Justice Team. This group advises the Moderator on a variety of issues including responding to Voluntary Assisted Dying (VAD) legislation, refugees, youth justice and others.

COVID-19 restrictions have prevented several congregational visits from occurring, including a visit to Palm Island—these are being rescheduled for later in the year.

The General Secretary provided the SSC with an update on Synod Office operational matters including amendments to policies, Uniting Education Early Learning and edUCate, the new learning management system for the Queensland Synod. She also advised that at the meeting of the Central Queensland Presbytery in July, approval was given for the amalgamation of the Longreach and Central West (including Barcaldine, Blackall and Alpha) congregations, effective 31 July 2021. The amalgamated congregation will be known as the Congregation of Central Western Queensland, Uniting Church in Australia effective 31 July 2021.

The Synod Standing Committee will next meet in person on 7 October 2021.